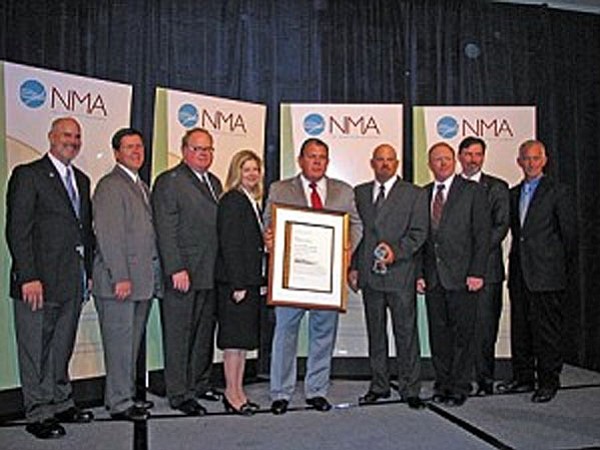 The U.S. Bureau of Land Management presented the agency's annual Hardrock Mineral Environmental Award at a dinner hosted by the National Mining Association. The award recognizes the efforts made in implementing the principles of sustainable development, a concept adopted by the United States and 192 other countries to balance environmental, economic, and social considerations in planning for mining operations.

The Clarkdale Tailing Reclamation Project by Phelps Dodge, a subsidiary of Freeport-McMoRan Copper & Gold, Inc., is located on private land just below Tuzigoot. The impoundment covers an area of approximately 129 acres of land now owned by Phelps Dodge. It contains about four million tons of tailing brought in from copper-containing ore from the United Verde copper mine five miles southwest of Jerome, between 1927 and 1953.

In 1981, the Town of Clarkdale began to pump treated effluent water from the town's wastewater treatment plant for discharge on top of the tailing impoundment. The EPA subsequently ordered the town to cease effluent disposal on the tailings.

Phelps Dodge undertook a series of measures to remediate and reclaim the site. Phelps Dodge assessed water quality at the site and in 2003 retained URS Corporation to design a soil cap for the former tailings pond. Capping and re-vegetation of the tailing impoundment has achieved a variety of environmental objectives, and the BLM said Phelps Dodge engaged in open and honest communication with the public and other stakeholders from project startup to completion.

"When it comes to the materials we rely on for our daily lives, we either have to grow them or dig them out of the ground. That is why sustainable mineral development is such an important part of the multiple-use mission of the BLM," Bureau of Land Management Director Jim Caswell said. "All of this year's award winners have shown excellence in the area of sustainable development in ways that will help the public lands continue to provide a range of resources for present and future generations."