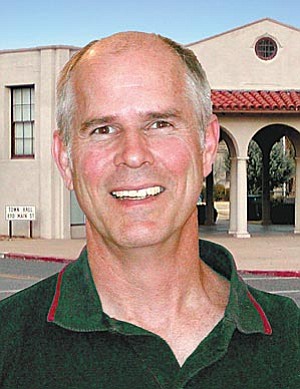 Clarkdale Mayor Doug Von Gausig will be unopposed in the mayoral race in 2008.

Because Jerome does not rotate its council seats, all five seats are up for election. So all four ballot candidates and the single write-in candidate could end up on the new council.

But to win a council seat during the primary a candidate must receive 50 percent of the votes cast plus one vote. If not, the candidate must run in the general election May 13.

Acting Town Clerk Al Palmieri said no incumbents have filed packets, however, one or more of them could still run as a write-in or join the race after the primary if all seats are not filled March 11.

Write-in candidates have until Jan. 31 to fill out a packet, but do not have to gather signatures.

If the election isn't settled during the primary, new candidates may get on the ballot by filling out election packets. "In the general election it's just the number of votes," Palmieri said. Percentages do not count.

A referendum challenging an ordinance that relates to zoning issues and annexation will be on the Jerome primary ballot.

A citizen's initiative to overturn the town's residency requirement for certain department heads will be on the ballot for the general election.

Two Clarkdale Town Council seats will be up for election in the March 11 primary. Pat Williams and Frank Sa currently hold those seats. Williams is running for reelection; Sa is not.

According to Town Clerk Walt Good, the only new candidate for council is Richard Dehnert. Unless another candidate starts a write-in campaign, Dehnert will fill Sa's seat and the council will see one new face.

Doug Von Gausig is running for re-election to a second term and faces no opposition.

All terms for mayor and council are for four years.

Good said no referendums or initiatives will be on the ballot.