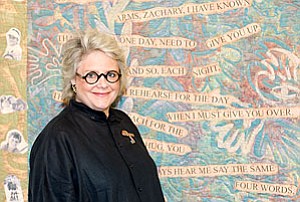 Photo courtesy of www.gregorycase.com <br>Mary Fisher against the backdrop of one of her best-known quilts.

I got A's in both American and World history, I loved the subject, but looking back, I can't recall one single woman hero that was ever presented to us. That may explain, in part, why being in the presence of Mary Fisher is an incredible honor, she truly is a hero.

A phone call changed her life in 1991 when the voice on the other end confirmed that she was HIV positive. She looked at her two young children who, oblivious as to how their world was about the shift from its axis, were laughing and playing, and had two choices; she could start planning her death or she could use what time she had left to expose the global epidemic of AIDS.

She couldn't have possibly known how many lives she would impact and indeed save on at least two continents, learning to see death as a part of living has taken her from a dark death sentence to a bright, nearly 17 years and counting.

"My art is the voice my soul uses when it has no other words to speak. Art is how I speak even to myself," says Fisher.

When first diagnosed her art reflected her emotions; fear that she might not live long enough to see her sons graduate from high school, sadness that many judged a disease rather than understand it, but now her art has taken on a new dimension, the horizon is further in the distance and there is more light.

Mary's life models the fishing parable, "If you give a man a fish he eats for a day, teach a man to fish and you'll feed him for life." The AIDS epidemic has affected many countries in Africa more than any place on the earth. In some areas 1 in 3 people are affected. The effect on households is severe. Many families have lost their income earners, others are forced to stay home to care for ailing loved ones, in some areas women who were infected by their husbands are shunned by them and by their communities and even their relatives, left without possibility of work, income and health care they die. Of these many leave behind orphans, a large percentage of which have the disease as well.

When called to Zambia, Mary said: "I saw myself in the women of Africa, we had something in common, we were and are sisters. Africa became its own passion in my life, it helped me to see death as a part of life! I looked death in the face and challenged it, held it off." Observing the critical need for afflicted women to have an income and knowing how helpful art had been in her own healing, Mary taught the women to fish, or rather to bead!

Mary designed bracelets, bought beads and taught AIDS and HIV infected women how to craft them. The bracelets are sold in the United States through macys.com, the Goldenstein Gallery in Sedona and through "O" the Oprah Magazine. The money all goes to the women but it's not just the tangible benefits that make this project so important. The jewelry makers gain a new sense of pride and hope, they feel deeply grateful that women in American buy their bracelets as a way to encourage them and help them to fight for their health and their lives. Once their lives were essentially over but art has given these souls hope and more practically, the income they need to survive! Fisher says that that makes her soul dance and sing. And that's why she's my hero.