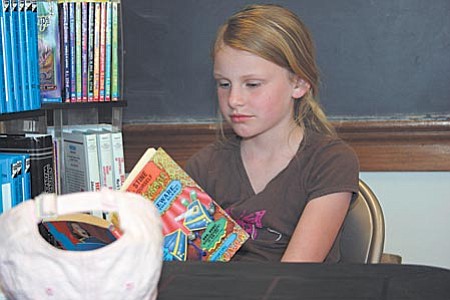 Ilana Ballew, 8-year-old member of the After School Adventure Club in the Jerome Library, was first to arrive for Wednesday’s session. She grabbed a book and read until some of her friends showed up. VVN/Philip Wright

The Jerome Library just added an After School Adventure Club to its growing youth-services programs.

Now the library has two rooms dedicated to children, dividing the programs and activities into appropriate age groups.

"The program became too big for downstairs," Librarian Kathleen Jarvis said. "You can't have the same program for 2-year-olds that you have for 10-year-olds." Now the separate rooms provide a natural divider for the children.

The little kids' area is on the main floor next to the adult library, with books and activities for toddlers and babies. Those activities include a monthly Music for Tots program, a puppet theater and crafts and story time.

It all got started a couple of years ago because Jarvis bought into the Jerome philosophy that, if you wait for the money to come before starting a project, the project won't get started. So with no money in her budget for a children's library, Jarvis and her assistant Kelly Roberge decided to just get the project under way, and then look for some money.

In short, the two women found grants, about $12,000 worth, from Qwest, APS and Phelps Dodge. Not only was it enough money to get the children's library started but also was enough money to do everything Jarvis envisioned. But that vision soon grew.

Al Palmieri, who was Town Clerk at the time, recently mentioned to Jarvis that a renovated room on the next floor was available. That was the only nudge she needed.

"About three or four months ago when I realized I could use this space, I still had some grant money left over," Jarvis said.

"Qwest has continued to fund our children's program," she said. They gave the kids program another $7,000 last year. "What we're doing right here is all grant money."

Now, Tanya Downey, Youth Services Director, has about 20 kids between 6 and 12 signed up for the After School Adventure Club, which meets Tuesday, Wednesday and Thursday. Typically, about six kids will show up on any given day.

Eight-year-old Ilana Ballew arrived first for Wednesday's adventure club. She said she has never missed. "I like it when a lot of people are here," she said. "My favorite thing is doing science projects. I love doing science."

Downey said she likes to let the kids choose which activity or project they want to do. The kids like imagination games, science projects, reading, drawing and crafts.

The program even has laptop computers that can be brought into the room and hooked to wireless Internet. Yavapai County Supervisor Chip Davis arranged for the computers to be donated, and Phelps Dodge paid for the laptops to be set up with Windows XP and related software. The company also paid for a technician to install the software and set up the room for wireless Internet.

Jarvis and Downey both feel confident the adventure club can be extended through summer vacation. They want all of these kids' programs to be open all year.

"The purpose is not to be a babysitter," Jarvis said. "It is to provide a safe educational learning environment."