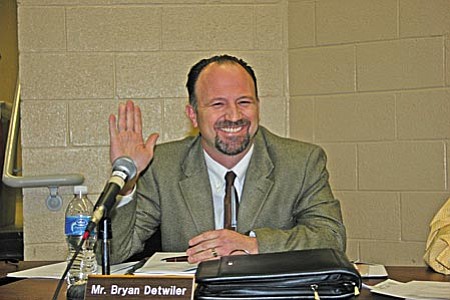 "We’re in crisis. We’re coming into a lean time when we’re going to have to run on fumes" Board President Bryan Detwiler

A rift has opened between the Mingus Union Education Association - which functions as a teachers' union - and the school's governing board and administration. The falling out is over two measures the board took last week to try to balance the district budget.

The second measure phases out health care benefits for retirees and their dependants over three years. The benefit will be eliminated for employees who retire after June 30, 2008. The governing board capped the retiree health benefit for this year at $207,000. Over the next two years, the benefit will be phased out completely.

Board members and administration say the current budget crisis left the district no choice but to make tough decisions. The State of Arizona is experiencing huge revenue deficits, but without even considering the state's education budget constraints, MUHS has been hit with a deficit of about $400,000 based solely on the school's diminishing student attendance. The school is down in its average daily attendance more than 100 students compared with one year ago. That reduction in students is expected to continue for at least several years.

MUEA members dislike the measures and have been wearing armbands to school in protest.

MUEA past president Howie Usher said the two issues are closely related. He said the board and administration essentially walked out on active negotiations that could have solved the budget deficit.

Regarding retiree health care insurance, Usher said negotiations were ongoing. When the board and administration met last week in executive session, teachers thought, according to Usher, that no action would be taken. He said teachers thought the meeting was only to discuss options.

"That's what they led us to believe," Usher said. He said further negotiations would have resulted in more options. "Data was being brought forth by both sides."

Superintendent Scott Dunsmore doesn't see it quite that way. "This early retirement incentive program has been on the table for two or three years," he said. "It has not come to any fruition."

Dunsmore said that governing board member Scott Stokes, who serves on the Interest Based Negotiations (IBN) committee, made a plea to MUEA to come up with a plan.

"To this day, I haven't seen any plan from the association," Dunsmore said.

Dunsmore said the teachers are highly valued by both the board and administration. The district now pays for half the cost of employees' dependent health-care coverage. He said that could go away if the district doesn't get rid of the retirees' insurance benefit.

Dunsmore said he and the board want security for students' programs and the district's employees.

"The budget is never part of negotiations," Dunsmore said. He said it is not part of the IBN process.

Usher felt the situation with the administration jobs was about the same as with the retiree's health insurance. He said the association understands full well that the district's budget will require that cuts be made.

"We have asked for cuts," Usher said. "MUEA has suggested that administration be cut."

Dunsmore said he doesn't understand how MUEA members can say they've been left out of the process. He said they requested cuts in administration and got what they asked for.

Usher said that after decades of the association and administration working together on such decisions, this time the decisions were made without proper input from teachers.

Some of the teachers are wearing armbands to show their opposition to the recent budget cuts.

During the April 10 school board meeting, Usher and couple of other teachers told the board that teachers do not discuss these issues in the classroom with students. When asked whether the armbands weren't another form of influencing students, Usher said the students aren't the primary audience. He said parents also see the teachers wearing the bands.

Board member Tom Parmarter thinks the students are the intended audience. "Why else would you do that?" Parmarter said. "Your only audience is the students."

Board President Bryan Detwiler said this is totally a union issue. "They went out of their way to explain that they weren't doing what they're doing now," he said.

"We're in crisis," Detwiler said. "We're coming into a lean time when we're going to have to run on fumes."