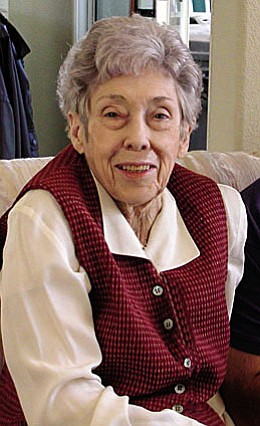 Cora was born in Las Vegas, N.M., to Frank and Marie Ettinger. Cora spent her early childhood years in Clarkdale until her father passed away in 1930. Cora and her mother returned to Mexico. Cora attended the University of Arizona in Tucson and New Mexico Highlands University where she graduated. Cora met her husband, Robert Nimmons, in 1945 and married in 1946. After a brief stay in Michigan, Cora and Bob moved to Flagstaff. They remained in Flagstaff for 52 years, relocating to Las Vegas, Nev., in 2002. Cora served as an elementary school teacher for many years at Nativity School, now St. Mary's Catholic School in Flagstaff. After leaving the teaching field she assisted her husband with the Arizona Elks Association Executive Director's office. and the theater. In her later years she attended the Shakespeare Festival in Cedar City, Utah every summer. Cora is preceded in death by her mother and father and her late husband Robert.

The family asks that donations be made to the Nathan Adelson Hospice in memory of Cora.