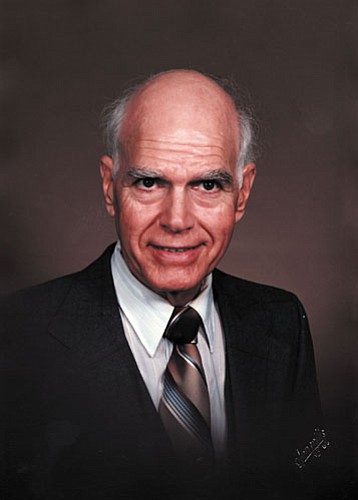 Norva Eugene Skaggs died at the Verde Valley Medical Center July 28, at the age of 83.

He was born June 3, 1925, in New Boston, Ohio. He was the son of Lewis C. and Flora Lyons Skaggs, both of Lawrence County, Kentucky.

Norva became a licensed minister with the Church of God in Cleveland, Tenn., and served as an evangelist and then pastored his first church in West Virginia.

In 1952, he traveled to Honduras to become a public school teacher, and then later, a missionary. In 1959, Norva returned to the United States and resided in Southern California until he retired in 1988 to Cottonwood. In his retirement years, he loved to create programs to better his local area and his beloved nation, including Character First and Prayer Cells, which encouraged Christians to pray for their country. He also wrote numerous letters to legislators and newspapers regarding issues that were important to him.

Norva was preceded in death by his mother, Flora (who died shortly after his birth); his father, Lewis; his sister, Velta; his brother, Ed; and his son, Larry,

He is survived by Cheffy, his wife of 34 years; his son, David, of Ione, Calif.; his daughter, Judy, of Fordingbridge, England; his sons, Danny, of Green Cove Springs, Fla.; and Paul, of Camp Verde; and 10 grandchildren,

A memorial service will be held at Evangel Worship Center in Cottonwood on Friday, Aug. 8 at 4 p.m. A fellowship meal will follow.