Bicycles are no longer just for kids
Share the Road 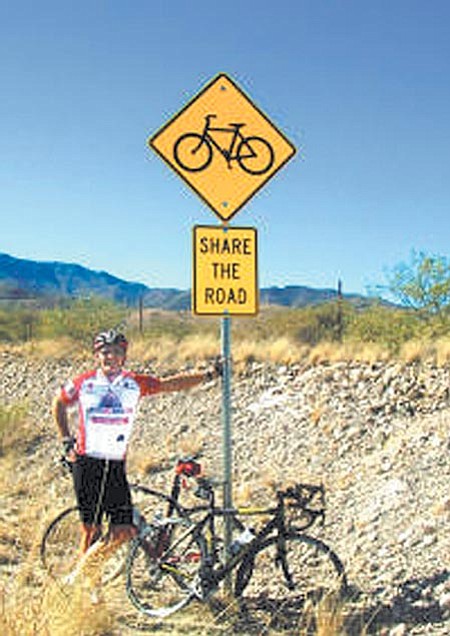 Some people seem pushed onto two wheels because of the high cost of fuel. It is unlikely that the majority of motorists will ever climb on bicycles for their daily commutes. But, it seems there are more bicycles on the streets these days.

Regular bicyclists just seem to like the fresh air, the good exercise and all the folks with a common interest to share. About 200 members of the Verde Valley Cycling Coalition enjoy one or more of the regular outings each week with friends, stopping for a morning brew and plenty of talk.

Randy Victory organized the Verde Valley Cycling Coalition in 2003. A ranger at Dead Horse Ranch State Park, Victory was interested increasing the visibility of cyclists in the Verde Valley. That mobilization today has born fruit. The city now has a bicycle plan and is planning bicycle lanes on more of its major streets. "Share the road" signs have popped up on several streets and bicycles are even warned "wrong way" when they ride against traffic rather than with it.

And Cottonwood is not considered a bicycling mecca. In Portland, Ore., for example, where bicyclists can be found everywhere, 6 percent of the population rides a bicycle regularly. Buses and light rail accommodate bikes.

This year, Cottonwood Mayor Diane Joens and other city employees joined others in bicycling to work.

A trail is proposed adjacent to Cornville Road that is expected to accommodate bicyclists and will stretch the number of routes available to two-wheeled vehicles in the Verde Valley.

Some communities across the United States are now offering bicycle-riding classes for adults who are just now learning, or perhaps, picking up a bicycle for the first time in a couple of decades.

Al Abbott coordinates bike rides for the coalition. He says road bikers are found in the streets while mountain bikers use their well-sprung bikes to launch themselves through the woods and down hills.

Al tends to refer to the group as a club. He says the word "coalition sounds too political.

"We don't have any teenagers in the group," he says. Most members range from the 40s; 82 is the oldest.

"I came here about five years ago from the Midwest, Bloomington Ind., where there are a lot of country roads to ride on," says Abbott. In the West, he explains, riding is limited to the number of places you can go. That tends to put a lot of bicyclists on city streets and state highways. State Route 89A between Cottonwood and Sedona is popular with riders because of the road's wide shoulders. Mingus Avenue in Cottonwood is wider and so is Main Street. Riding SR 89A over Mingus Mountain, though, is not for the timid.

Al and friends just returned from Colorado where they biked a loop in the Durango area.

At Zoomer's Bike & Gear, a dedicated bicycle shop on Main Street in Cottonwood, people tend to shop for bicycles that "are comfortable."

While religious bikers are happy to have a local bike shop, many customers just ride around the neighborhood.

Manager Patrick Wiatrolik says more people are bringing in bicycles that have been sitting in the garage for a while to be put back in shape.

Al Abbott says you can expect a little sticker shock to buy a good bicycle. Most start around $500 these days.

Abbott says the organization will help new riders get comfortable with being on the road.

Mark Luffman, who rides a recumbent bicycle, agrees that riding on the street with 2,000-pound cars can be intimidating. It is less intimidating with 15-20 people on a ride. That's why they suggest new riders join the Friday rides that complete a circuit between Cottonwood and Clarkdale over the Old Jerome Highway and back along Broadway through Old Town.

Riders will share their experiences and safety tips that can get a new rider on the right track. "They might suggest shifting to an easier gear, for example," says Al. A priority for the organization is enjoyment and education. It is important to be safe on the roads and ride defensively.

The organizations ride schedule can be found at http://vvcc.us.

Letter: ‘Rules of the Road’ as applicable to bicyclists as to motorists
Letter: Design roads for riders as bicycling is here to stay
City Pedals to ‘Road Diet’
Share the road and co-exist
Verde Valley Cyclists Coalition is about more than just riding bikes
Event Calendar