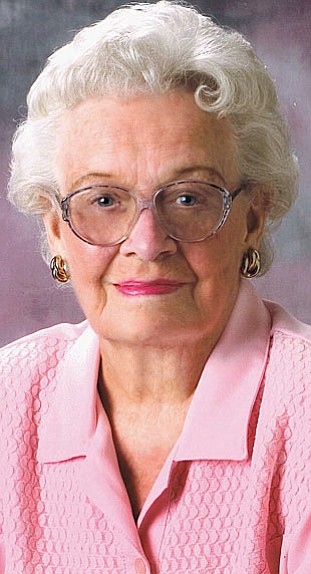 Patricia Elinor Harris, a long time Clarkdale resident, died Aug. 12, 2008. She was born in San Diego, Calif., June 5, 1923, to Dorothy Knox and Donald McQuiston. She lived most of her life in Arizona.

She married the late Les Harris of Phoenix in 1942 during World War II. She joined the U.S. Navy Waves while Les was serving on a ship in the Pacific Theater. One of Pat's favorite memories while in the Navy Waves was being chosen to be a page for the original meeting of the United Nations at the Opera House in San Francisco in 1945.

Pat and Les had three sons and a daughter in Phoenix.

Pat was very involved in Woman's Clubs, PTA, Girl and Boy Scouts, The Red Cross, and the Beatitudes Congregational Church in Phoenix. She and Les moved to Clarkdale in 1966. She was a member of the Verde Valley County Club and Women's Golfers, El Valle Artistes Association and the St. Thomas Episcopal Church.

Pat enjoyed being with her family, painting, reading, and playing golf when she was younger with her friends. She and Les enjoyed traveling and lived briefly during Les' career in Saudi Arabia, Sri Lanka, and Nome, Alaska. They also enjoyed their many summers at Mormon Lake.

She leaves behind her children Hank (Margaret); of Clarkdale; Steve of Alaska; brothers Don (Marilyn McQuiston of Big Fork, Mont., and Jay (Barbara) McQuiston, of Chico, Calif.; and three grandchildren.

Memorial services will be at 1 p.m., Aug. 29, at the St. Thomas Episcopal Church, 971 S. First St., Clarkdale. Reception to follow at the church.