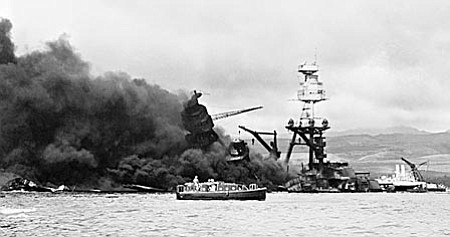 Today, Dec. 7, is Pearl Harbor Day, and each year we are asked to ponder the impact of the 1941 attack in today's world. Considering the event changed the United States forever and subsequently humankind, that is a pretty large task.

What we can remember from the aftermath of Dec. 7, 1941, especially in our post-9/11 society, is not just that it immediately drew us into World War II and instigated a hatred for the Japanese Empire. Over time, the United States brought around its relationship with Japan to make it one of our closest allies, something that would have been unthinkable on Dec. 8, 1941.

That should give us hope for our association with the Middle East and the knowledge that it will probably take a long, long time to build bonds. With the example of our diplomatic relations with Japan and Germany today, we know nothing is impossible.

The surprise attack on Pearl Harbor early on a Sunday morning killed more than 2,400 people, many of them kids really, and nearly half of them aboard the USS Arizona. More than 50 civilians died.

While the United States was the victim, we did not do everything right in reaction. A lot of second-guessing will always hound the legacies of President Roosevelt and President Truman. Overall, however, we had good reason to see our fight as a just cause.

Shock, rage, revenge and war were all knowable responses to the events at Pearl Harbor. How the war would touch every family in the United States perhaps was not.

Those Americans for whom Dec. 7, 1941, is just an event in a history book but who did experience Sept. 11, 2001, can identify on a certain level. Again shock, rage, revenge and war were all human nature. In a fast-paced society, second-guessing has come more quickly as have ideas for amending our own wrongs.

One of the best lessons we can learn from Pearl Harbor is patience. Something so horrific can eventually lead to better understanding with dedicated diplomacy and passage of time.