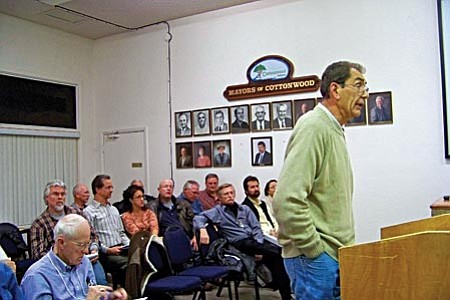 When the Cottonwood Airport Commission was first created in the summer of 2007, the first item on their list of duties was to develop an operations and procedures manual for the airport.

Tuesday, that manual was brought before the Cottonwood Council for approval, but the manual came with a roomful of disagreement. The subsequent discussion stretched nearly two hours.

It became clear from the very first speaker that there was a deep difference among members of the Airport Commission and the users about whether of the manual should be adopted as law by ordinance or whether it should be considered "best management practices," though not an ordinance.

As the story unfolded, the 19-page rule book had been proposed to be adopted as a whole but that seven items were separated out to be adopted by ordinance and enforced as law, such as speeds on the airstrip. In that form, the document was approve unanimously by the Commission in August, according to Larry Minch, vice-chair of the Commission.

But in November, Minch said, "the chairman put forward a renegade action, a rogue resolution." That motion recommended approving the entire document as an ordinance.

The November motion was approved by a narrow 3- 2 vote with two members absent.

Chairman Al Gradijan told the council, "I was disgusted. It became a circus. I said 'enough is enough, lets get it over.'"

He told the council that the board had looked at other communities and most had operating rules and they were created in the form of a law when drafted.

"My position," said Manager Doug Bartosh, "was that the document was put together by an advisory commission, it was well-crafted, so why not share it with the council and get approval."

Carl Priggey of Red Rock Skydiving told the council that the rules do not apply equally to everyone and should not be put in ordinance form.

A mechanic who maintains the medical helicopter at the hospital told the council that the Cottonwood Airport is a "public access" airport and is not regulated by Homeland Security as the commission claims in the rules. "It doesn't ring true," he said.

Public Works Director Tim Costello, who also serves as the Airport Manager, says, "It is problematic and not enforceable if not an ordinance. For example, There is no rule to say a person cannot park a mobile home or large truck there. We need a rule that requires that wrecked aircraft be moved and that a fee is imposed for long-term storage. We are not going to have an enforcer or watchdog there. We hope the code will be enforced by peer pressure."

The rules provide that a users key to the entrance gate would be suspended for violations of the code.

One pilot, Dick Lucas, suggested, "Cottonwood would become the laughing stock of Arizona. If enacted, the city may face the law of unintended consequences. We want to keep the airport fun, not load it down with regulations."

Commissioner Jim Moeney supported enacting the rules as an ordinance. Another commissioner, John Altizer, did not.

The council was clearly concerned that the issue was so divisive.

Karen Pfeifer said the Commission was originally formed "because there were problems at the airport. All this back-biting and division are not doing anyone any good. It is all: 'I want, I want I want.'"

Mayor Diane Joens said the Commission "seems to be divided and not working together. I am sorry to hear that," she said. She was also concerned that the "Commission may not be making rules that are the best fit for the community." She wanted to make sure that interests of the hang-gliding and para-sail community were also recognized in the document.

In response to some citizen comments, Joens asked the council whether it ever considered the airport commission to be an independent body or one with an advisory capacity.

Horton suggested that the enabling ordinance that created the Airport Commission perhaps gave more authority than the city may lawfully grant a commission.

A tenant at the airport, Fred Olsen, said these are "common sense procedures," and in some cases govern minor little things. "They should be operating rules. They should not be an ordinance."

But an ordinance is not approved until the council vote and second reading. That may occur at a future council meeting.