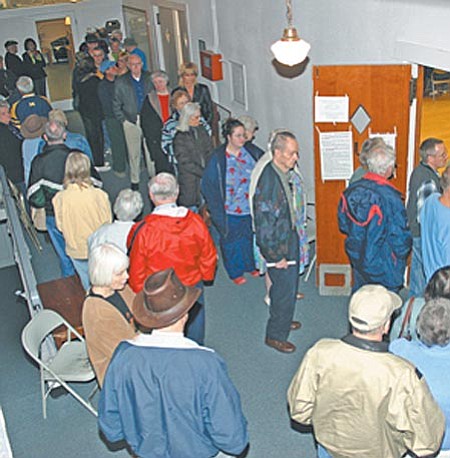 Voters waited in line up to two hours to vote at the old Clemenceau School in Cottonwood. VVN/Philip Wright

PRESCOTT - Election officials are estimating that a record percentage of Yavapai County voters went to the polls Tuesday for the presidential preference election.

And it is a good bet that a record number of them were angry, too.

That is because Yavapai County voters reported waiting in line for as long as two hours to cast their ballots. Election officials and others do not recall any waits that long here in the past.

She explained that the Recorder's Office had to decide six months ago how many polling places to provide, because officials have to reserve the sites in plenty of time.

As an apparent cost-saving measure, state law limits the number of polling places in presidential preference elections to one site for every 2,000 voters in counties the size of Yavapai. That would add up to a maximum of about 53 polling places in this county.

That still was eight more sites than the 2004 presidential preference election, Constabile said. The county increased its polling places by 33 percent knowing that both parties would have competition, but six months ago they did not know who the candidates would be, she added.

Tyne said he did not have a list of how many polling places other counties provided. However, the U.S. Department of Justice has to approve the numbers, he said.

The state pays for the cost of the polling places, which Constabile estimates is about $1,500 per polling place.

With the Elections Department phones ringing off the hooks with complaints Tuesday, Constabile went to the radio airwaves in search of more poll workers.

Constabile said besides the unanticipated high voter turnout, numerous people who were not registered as Democrats or Republicans tried to vote. Unlike regular elections, non-party voters cannot vote in the presidential preference elections.

Even though votes from those people will not count, poll workers let them fill out provisional ballots if they insisted on voting, Constabile said.

That led to a shortage of provisional ballots in some locations, so election workers had to deliver more.

Constabile said every registered voter will receive a letter from the county during the coming month that lets them know about a new state law that allows voters to join permanent early voter lists so they automatically receive early ballots in the mail for every election in which those ballots are available.