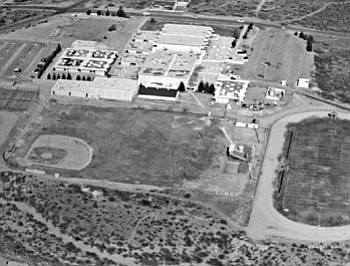 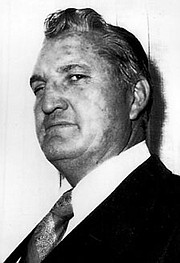 In September 1960, 350 students started the new semester at Mingus Union High School in Jerome. Those students came from Cottonwood, Clarkdale, Jerome and Sedona. MUHS remained in Jerome until 1972.

A Page One story in The Verde Independent on March 24, 1971 was headlined: "MUHS is Go!" The decision had been made to move from Jerome to Cottonwood and plans had been made for a new campus.

The new site wasn't exactly in the middle of town as it is now. The story said the new school was to be "located on a parcel of land southeast of Cottonwood at the junction of Route 89A and Highway 279." That location today is smack in the middle of the town's business district and the address is 1801 E. Fir St.

That story reported that the land had been donated by the Verde Land and Development Corp., and the new school would accommodate 625 students with expansion room for 400 more. The school was to have 20 classrooms in four pods.

Because so many of Mingus Union's students lived in Cottonwood, the school had already started moving - in some ways - down the mountain. In the same edition of The Verde Independent, two other stories demonstrate how much more convenient Cottonwood was than Jerome for the school's activities.

One of the headlines read: "Moms at MUHS award night."

Today that wouldn't seem newsworthy. But the story explains itself. "Awards night for Mingus Union High School basketball and wrestling athletics was held last Thursday night at the Cottonwood Elementary School. Mothers of the award winners were invited for the first time, a break in the traditionally all male function."

The second story informed the newspaper's readers that the MUHS music department's annual spring concert for the Marauder band and chorus also would be held at Cottonwood Elementary School.

At the same time, people in Jerome were getting ready for the loss of the high school. A Page One headline in The Verde Independent on May 4, 1972 stated: "Jerome meeting to consider high school preservation." The Jerome Historical Society sponsored that meeting. The high school site and its buildings were being looked at for a possible mining hall of fame or a community center for concerts and cultural events.

Even before MUHS moved into the new campus in Cottonwood, which it wasn't scheduled to do until August, the school held its graduation ceremony at the end of May in the new school.

The May 25, 1972 edition of The Verde Independent reported "Mingus Union High School commencement exercises are tomorrow at 8 p.m. in the auditorium of the new high school in Cottonwood."

School was scheduled to begin at the new campus Aug. 30.

A story in the Aug. 24, 1972 edition of The Verde Independent reported on a special ceremony to honor the new school in Cottonwood.

"Dignitaries from throughout the state were on hand last Friday night at the keyturning ceremonies at Mingus Union High School to pay tribute to school officials and others responsible for the fine, new school.