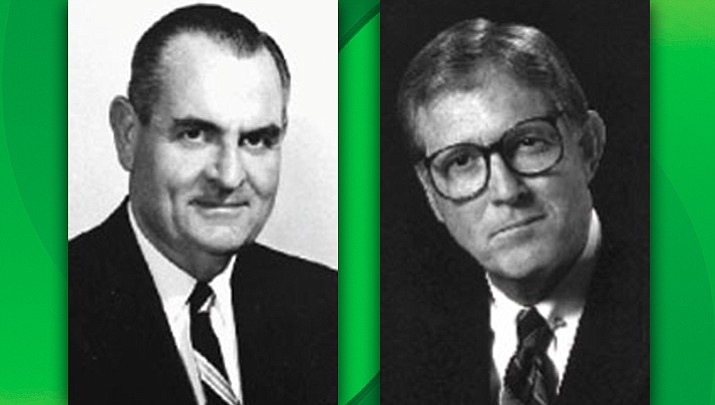 At the height of the mining operations in Jerome, the Phelps Dodge Company operated the United Verde Hospital in Jerome. At the location of the Clemenceau smelter in Cottonwood, the United Verde Extension Mining Company established a health facility for their employees and families.

As the mines began their gradual decline, health professionals feared the company-run facility would shut down. A.C. Carlson, M.D., chief of staff of the Jerome hospital, is credited with inspiring Carrie Lawrence to found a clinic in memory of her late son, Marcus. On June 2, 1939, the Marcus J. Lawrence (MJL) Memorial Clinical, located on Main Street in Old Town Cottonwood, was officially opened. The outpatient facility contained physician offices, X-ray equipment and an operating room.

Responding to community need, the clinic underwent a major expansion in 1945. With the addition of 24 beds (and an addition 14 beds just two years later), the clinic became a hospital.

In 1957 Roland Wilpitz became the administrator of MJL. Almost immediately, Wilpitz and the MJL Board of Directors began making plans for a new facility. Board member Ersel Garrison and his wife, Jennie, donated 26 acres on Willard Street for the new hospital.

In September 1965 the MJL Hospital opened its doors at its present location. The new facility had 50 beds and more space for support services.

In 1985 a CT scan was installed, and Hospice and Home Health offices opened. In 1986 MJL opened an outpatient surgery unit, followed by Magnetic Resonance Imaging (MRI) installed in 1992.

A groundbreaking for the new Sedona Medical Center was held in 1993 and MJL announced that Emergency, Oncology and specialty physician services would be offered at this location.

In 1994 MJL and Flagstaff Medical Center announced their affiliation under the umbrella of parent corporation, Northern Arizona Healthcare. In 1995, Rita Poindexter accepted the position as MJL president.

In 1997 MJL announced plans for a $22 million major expansion. The following year Rita Poindexter retired and Craig Owens accepted the position of president. MJL also announced plans for a $1.8 million healthcare facility in Camp Verde. At its August meeting, the MJL Board of Directors voted to change the name of the organization to the Verde Valley Medical Center.

In January 1999 the VVMC dedication took place with Arizona Secretary of State Betsy Bayless providing the keynote address. In March, the first diagnostic cardiac catheterizations were performed in VVMC's newly completed Cath Lab. In May, Northern Arizona Hospice celebrated its 15-year anniversary in the Verde Valley.

In 2000 a renovation of the MJL wing (current Cottonwood and Sedona units) was undertaken, which included new wall coverings, artwork, carpet and furniture. The following year, 2001, VVMC added two state-of-the-art ultrasound machines in Medical Imaging and a new polysomnography system in the Sleep Lab. A $1 million renovation of the Mingus unit was undertaken, and interventional cardiology services were greatly expanded. In the Cath Lab, VVMC began offering balloon angioplasty and coronary stent insertions for selected cardiac patients. Also in 2001, VVMC purchased a $2+ million medical helicopter to be stationed on site. At the helicopter dedication, Arizona Secretary of State Betsy Bayless honored VVMC's commitment to the community by proclaiming Aug. 29 VVMC Day statewide.

In 2005 VVMC installed a 64-slice CT scanner on the Cottonwood campus - only the fourth hospital in Arizona to offer this level of technology. In 2007 VVMC was one of only two hospitals in Arizona to receive a national Get With The Guidelines Performance Achievement Award in recognition of treating heart patients according to the most up-to-date scientific guidelines. VVMC also was awarded the 2007 Employer Excellence Award by the Arizona Nurses Association. Only one state healthcare facility is honored with this award once every two years for outstanding support of nursing leadership and creating a professional environment of nursing practice, education and excellence.