On the Banks of Beaver Creek...
Lake Montezuma: From ranch to resort

Like so many rural communities in Arizona, Beaver Creek, specifically the portion known as Lake Montezuma, began as a ranch. 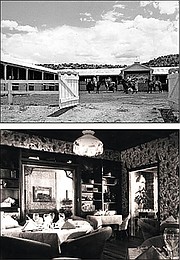 Top: Phoenix radio and television personality Lew King (best known for discovering Wayne Newton) would become the first person to exploit the ranch's development potential. He had originally intended to create a ranch/camp, a retreat in the country. Bottom: The original dining area of the Ranch House Restaurant and Lounge.

Like so many rural communities in Arizona, Beaver Creek, specifically the portion known as Lake Montezuma, began as a ranch.

What is now the clubhouse of the Beaver Creek Golf Resort was once the ranch house, a name that lives on in the resort's restaurant.

The property that is now Lake Montezuma and the golf resort was first settled by one of the Verde Valley's better known pioneers, Wales Arnold.

From the time Arnold first settled the banks of Beaver Creek in 1870 to the beginning of its modern-day story, the Home Ranch, as it was known, transferred ownership numerous times.

At the time the Verde Independent pressed its first issue in 1948, it was owned by Kenneth and Elizabeth Watters.

The Watters sold to Burt Carroll in the mid-1950s, who in failing health sold the place to D.K. and Nina Wingfield in 1957, who in turn sold it to a group of investors the next year.

Which is where the real story of Lake Montezuma begins.

The most prominent member of the investor group was Phoenix radio and television personality Lew King. King, who is best known for having discovered Wayne Newton, would become the first person to exploit the ranch's development potential.

He had originally intended to create a ranch/camp, a retreat in the country, but soon figured out the most lucrative thing to do was to sell it off, piece by piece.

One of his first moves was to change the name of the place from the Home Ranch to Lake Montezuma, recognizing its connection to Montezuma Well and Montezuma Castle.

The name also recognized the pond on the ranch that he expanded into a lake.

King and the other investors became interested in other opportunities and sold the fledgling development to Jack Renn and John Westman in 1960, complete with a nine-hole golf course.

A year later, Renn and Westman expanded the course to 18 holes.

Marketing for Lake Montezuma was casual to begin with, often using beer and sandwiches to lure potential buyers.

By 1962, promotion of the development went pro. It was marketed on radio, in newspapers and on television.

The owners offered hayrides and barn dances at the stables while more dances and even luaus went on at the clubhouse. One promotion featured an appaloosa horse as a prize.

In the late 1960s, the development sold to Charles Hallett, a trustee for the Lake Montezuma Development Company, Southwest Land and Title and Educational Computer Services, all companies under the control of one of Arizona's most notorious land swindlers, Ned Warren.

By 1972, the country club was in bankruptcy. The golf course was kept in shape through the efforts of the homeowners.

The business flipped several more times after it was purchased out of bankruptcy in 1978.

It is Hayes and Powers whose signature defines the new resort.

They changed the name of the restaurant from the Quail's Nest to the Ranch house in 1986.

They even changed the original front nine to the back nine, for reasons that have never been fully understood by some of the old timers.