Our Own College
Yavapai College establishes Verde Campus in 1975 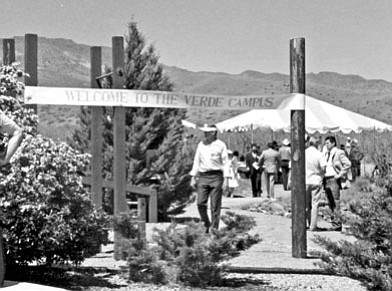 The original amenities of the Clarkdale Verde Campus included four classrooms, a library and the administration office. The four buildings were constructed by Jerry Comer Construction Co. of Phoenix for $198,068.<br> <i>Photo courtesy of Mary Anne Bamrick</i> 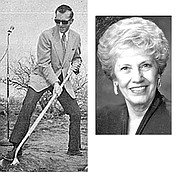 The concept of community college came to Yavapai County in 1969 when Yavapai College opened in Prescott. The college expanded to its new campus in Clarkdale in September 1975.

The Clarkdale Campus was the base of the Verde Valley portion of Yavapai College, but the concept of "community" was truly the objective. When classes began Sept. 2, they were held not only on campus but also in the communities of the Verde Valley.

An Oct. 22 story in The Verde Independent explained that beside the Verde campus, classes met at the old Clarkdale High School, Mingus Union High School, both elementary schools in Sedona and schools in Cornville, Camp Verde and Lake Montezuma. More than 285 classes were offered at various locations throughout the valley.

The community concept was immediately put into action. An Aug. 6 story in The Verde Independent let everyone know that "Registration for full classes at Yavapai College's Verde Valley campus began Monday at the old Clarkdale High School for full-time, part-time and retirement college students."

The Aug. 27 edition of The Verde Independent contained two stories announcing useful courses for valley residents. The first story was headlined "Y.C. firefighter courses due Clarkdale and Sedona." A course teaching introduction to fire suppression was offered at the old Clarkdale High School and another course in firefighting strategy and tactics was offered in Sedona.

The second story's headline announced, "Y.C. sets home repairs course." This was a non-credit course at West Sedona School called "Handling Household Emergencies." It taught people how to take care of just about any repair emergency, including maintenance of coolers, air-conditioners, furnaces and appliances.

Teaching methods in the community college environment was the topic of a Sept. 3 story in The Verde Independent. A caption under a photograph stated, "The 96 part-time instructors, many of them local people, will teach at the new Verde Valley branch campus."

Dr. Joseph Russo, Yavapai College president, spoke to the instructors. The story said, "Russo charged the faculty to strive for professional excellence in instruction. The community college is basically a teaching institution and not one devoted to research."

But bringing new teaching methods to the Verde Valley wasn't the only innovation introduced to the area. Some new forms of entertainment also came to the Valley. In an Aug. 20 story, The Verde Independent used the headline: "Bring pillow to Y.C. entertainment." That story explained that since chairs were not available, people should bring pillows to sit on.

The story was about an act that toured the United States with the Carpenters and appeared on more than 100 television shows, including Johnny Carson. "Skiles and Henderson will offer a new concept in college entertainment - a pillow concert - in the Yavapai College student center."

An Oct. 15 story in The Verde Independent announced the college dedication ceremony set for Oct. 19. "On the campus are four classrooms, a library and the administration office. The four buildings, constructed by Jerry Comer Construction Co. of Phoenix, at $198,068, will be available for inspection during the ceremonies."

The Verde Independent covered the actual dedication ceremony on Oct. 19 in its Oct. 22 edition with a full-page photo spread. The captions told that about 250 people attended the event held on the parking lot. Sam Steiger, U.S. House of Representatives, was the guest speaker.