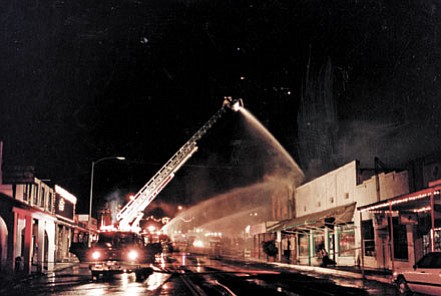 The fire began in the back of the building, spread to the front and consumed the roof. It then grew rapidly, sending balls of flame 50 feet high.

It took almost four hours and about 70 men to fully control the fire that destroyed the Old Town Palace theater.

The Old Town Palace Theater would have closed one day anyway with the growing threat of competition from multi-screen theater complexes, but it was the last of many Old Town Cottonwood fires that suddenly closed the curtain the final time Dec. 8, 1998.

It was a frigid night and owner Dave Austin had fired up hanging furnaces starting at 4 p.m. to heat up the movie house in time for the 7 p.m. showing of the night's feature Vampires. Dave then left until he got a call from Camille Kirton of neighboring Camille's Restaurant that his little theater was on fire.

Fire Chief Mike Casson later believed it was those heaters that, over time, caused a pyrolysis of the wood in the roof, leading to its eventual combustion that chilly night.

Even though it was built of concrete, the walls were lined with curtains, the roof and stage were wooden and the seats were also flammable.

The fire began in the back of the building, spread to the front and consumed the roof. It then grew rapidly, sending balls of flame 50 feet high.

It was a Tuesday night and the Cottonwood City Council was scheduled for its regular meeting. Coun cil members stood at the door and watched as crews converged on the blaze.

Initially, Casson sent crews inside the theater to fight the fire, but the blaze was already so hot and consuming the attic that the men were pulled out with the growing danger that it would collapse on them

It was a four-alarm fire and departments from throughout the Verde Valley sent equipment and manpower to Main Street. Sedona and Montezuma-Rimrock backed up departments that had converged on Old Town.

Fire crews poured water from four different directions onto the theater building. When the water demand from the fire exhausted the supply in the Old Town reservoir, tanker trucks from throughout the Verde Valley formed a shuttle line of trucks to bring water from a reliable Black Hills area hydrant and from the Cottonwood Ditch.

The tanker trucks dumped water into three 4,000-gallon portable water basins that fed the fire engines streaming water from hoses and ladder trucks onto the fire at a combined rate of 3,500 gallons per minute.

The Leaf Line Garden Center stood next door to the theater. The Verde Independent reported that one fireman worked from the roof of the Leaf Line "nearly suffered frostbite as the temperatures dropped to 22 degrees and he was faced with the task of clearing gutters to relieve the pressure caused by three feet of standing water that threatened to collapse the building's roof."

Crews prevented the neighboring wood-framed businesses from catching fire, too. Casson remembers, "We had fire brands landing everywhere." Crews had a priority to keep the fire from spreading.

"We are trying to do everything we can to keep it from burning up the other end of Old Town," Casson told the newspaper that night.

It still took almost four hours and almost 70 men to fully tame the beast. Some crews remained on the scene all night.

The Old Town Palace was built of poured concrete walls. An Italian named Joseph Becchetti built the solid structure after his first theater, made of wood, was leveled during a December 1917 fire that destroyed five buildings and seven businesses in Old Town. Becchetti opened the theater for both films and visiting vaudeville shows.

Becchetti's Rialto Theater opened in 1923. Fire burned in Old Town again in 1925, but left the Rialto only scorched that time.

The theater later became the Old Town Palace Theater under Austin's ownership and enjoyed the reputation as the longest-operating single-screen theater in the United States, before that blaze in December 1998.