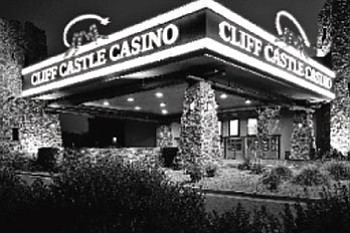 On May 25, 1995, the Cliff Castle Casino opened its doors for the first time. Fortune had at last smiled on the Yavapai-Apache people for the first time since the intrusion of white settlers on their lands in the 1860s.

Tribal Elder Ted Smith Sr. was one of the driving forces in the establishment of the Cliff Castle Casino. Vincent Randall served as tribal chairman in 1966 and again from 1997-2000.

The earliest recorded references to the Yavapai date from the late 1600s and the Apache from the mid 1700s.

Throughout their existence, both tribes lived a nomadic life, hunting and harvesting what nature provided. It was a rough way to make a living, especially in a land that is less than generous with its bounty.

Their history, up until just recently, is one of doing without.

In the early 1990s things began to turn around for the Yavapai-Apache in the Verde Valley, when the tribal council elected to do what so many other tribes had done to break out of poverty -- they opened a casino.

It changed the entire face and fate of the Nation.

Tribal elder Vincent Randall said he remembers being the Tribal Chairman in 1966.

"When I was chairman the first time, we had one employee. His job was to walk the irrigation ditches and make sure they were kept going. He was paid through a grant. When I came back 30 years later, we had 50 departments of tribal government," said Randall.

The transformation didn't happen overnight. It took three years from the time the casino opened to get to a point where the Nation had money for anything other than repaying debts.

The modern history of the Nation began in 1934 with the Indian Reorganization Act. The federal law gave sovereign status to the Yavapai-Apache and established their legitimacy.

But that is about all it did. They were made a people once again, at least in the eyes of the same government that had a long record of broken promises and failed policies.

By then most of the tribal members living in Clarkdale were working for the mines in Jerome or the smelters down the hill. Those who lived in Middle Verde farmed and worked at the local ranches.

None of them were getting rich.

For homes they had shacks surrounded by small garden plots from which they subsidized their existence growing melons, squash and whatever else would grow on their marginal land.

In Middle Verde, they lived on land set aside as reservation in 1917. In Clarkdale, they were squatters on land owned by Phelps Dodge, owners of the Jerome mines. It would not be until 1969 that the Clarkdale property would officially become theirs.

In 1952, all mining in the Verde Valley ceased. Most of the smelter workers went to Phelps Dodge's operation in Ajo. The miners went off to other copper mines in Superior, Bisbee and Globe in order to feed their families.

Those who stuck around eked out a living as best they could.

Attempts at commercial farming in the 1950s met with mixed success. In the 1970s, the Yavapai-Apache like so many other Native American Tribes finally won a monetary settlement for their lands.

It was pennies on the dollar, but it gave the Nation a chance to start providing services to tribal members.

Unfortunately, when the federal government allowed 80 percent of the money to be distributed on per capita bases to tribal members, it left little for the nation to operate on.

By the late 1970s, it became a struggle once again to survive.

According to Randall, one of the means used to keep the families afloat was the work of the women in the tribe.

In Clarkdale, many of them worked for Penn-Mor where they were paid piecework wages to sew. First they sewed camouflage for the military during Vietnam. Later, the company shifted to making underwear.

In Middle Verde, they did much of the work tending farms.

Then in 1988, the federal government passed the Indian Gaming Regulatory Act, which set the framework still used to establish casinos on Indian lands.

It took a few years to get established, but on May 25, 1995, the Cliff Castle Casino opened its doors for the first time.

Fortune had at last smiled on the Yavapai-Apache people for the first time since the intrusion of white settlers on their lands in the 1860s.

The casino has gone through many changes in the last 13 years. It expanded in 1997 and added an 82-room hotel plus conference center and restaurant in 1998. In 2000, it got a complete makeover, expanding once again and moving to its present location.

Under the guidance of the tribal council, profits from gaming have been continually reinvested in other tribal businesses as opposed to paying out in lump sums to the tribal members. It was a valuable lesson learned and one they have avoided making again.

Those businesses include a construction company. A ranch, a sand-and-gravel and redi-mix company, wastewater services, gaming consultation and helping bankroll other Indian peoples on their road to posterity.