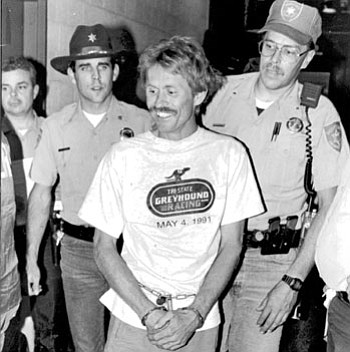 When bank robber and murderer Danny Ray Horning was arrested by deputies from the Yavapai County Sheriff’s Office on July 5, 1992, the only news organization in the United States to provide on-the-scene coverage of his capture was The Verde Independent.<br> <i>VVN file photo by Dan Engler</i> 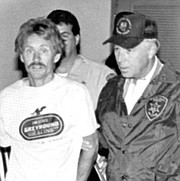 It was the biggest fugitive manhunt in the history of Arizona.

During the summer of 1992, it was the lead story every day, on the hour, for every major news organization in the United States.

But when bank robber and murderer Danny Ray Horning was at long last arrested by deputies from the Yavapai County Sheriff's Office on July 5, 1992, the only news organization in the United States to provide on-the-scene coverage of his capture was The Verde Independent.

It all began May 12, 1992, when Horning walked out of the Arizona State Prison - where he was serving four consecutive life sentences - while dressed as a medical technician.

Over the next 54 days, Horning led officers on chases through the rugged backcountry of the Coconino National Forest and Grand Canyon National Park.

Kidnappings, vehicle thefts, shootouts with police and his uncanny ability to confuse expert tracking dogs made Horning the focus of national media attention.

When he was finally captured hiding beneath a gazebo near a home in the Pine Valley subdivision in the Village of Oak Creek, both Horning and the lawmen who caught him were flashing wide smiles and passing one-liners back and forth like old friends who had not seen each other in years.

"I wish we could do this every week," Horning said of his game of hide-and-seek with authorities.

"I went through four cars during this; two good cars," Horning bragged.

The chase did take its toll on him, however. He told Coconino County Sheriff Joe Richards he had lost considerable weight because he had a 28-inch waist. He knew so because that was the pants size from a park ranger uniform he stole while on the run at Grand Canyon National Park.

Horning's final day of freedom - Independence Day - began with a kidnapping, shootout and car theft at the Grand Canyon. Horning led authorities on a high-speed chase for more than 100 miles before wrecking his stolen car near the Rocky Park Road interchange on Interstate 17. From there, he fled on foot and ran in tortuous heat through Jacks Canyon and eventually made his way to VOC. There, residents saw Horning drinking from a water hose and the YCSO was called.

Following his capture, officer Zane Simmons drove Horning from VOC to the Camp Verde Jail. "He seemed relieved, that was my impression," Simmons told The Verde Independent. "He talked quite a bit. Basically he did a lot of bragging, but he said he was relieved it was over. He said the water got him."

Horning also seemed more than aware that this was probably his last 15 minutes of fame. When a Verde Independent photographer approached him to take his picture in a holding cell at the Camp Verde jail, Horning said, "Wait a few minutes and I'll comb my hair. I'm sure it's a mess."

Today, Danny Ray Horning is on death row in California's San Quentin Prison for the murder of Sammy McCullough, a marijuana dealer and fish farmer from Stockton, Calif.