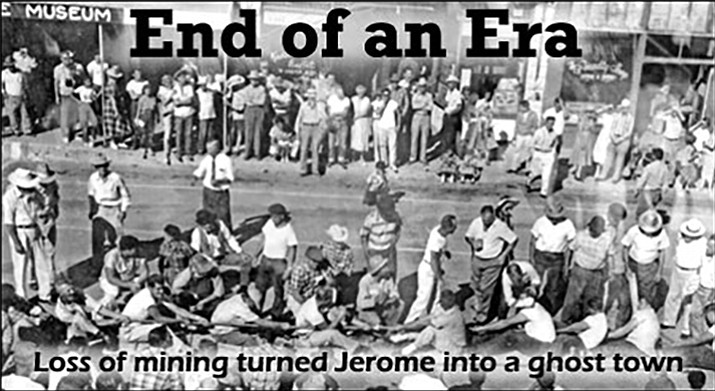 As the amount of ore coming out of Jerome's Phelps Dodge mine steadily dwindled, the activity in Clarkdale's smelter slowed commensurately. But there was nothing similar - let alone equal - in how the two towns reacted to the loss of copper and other valuable ores. 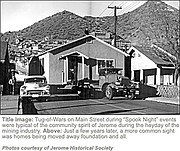 As the amount of ore coming out of Jerome's Phelps Dodge mine steadily dwindled, the activity in Clarkdale's smelter slowed commensurately. But there was nothing similar - let alone equal - in how the two towns reacted to the loss of copper and other valuable ores.

Jerome lost its residents and became a ghost town. Clarkdale hung in there, attracting a different type of resident.

Almost a year before the mine in Jerome closed officially, the slowdown was routinely covered in The Verde Independent. A Page 1 story in the June 12, 1952 Verde Independent carried a headline that read: "No closing date for mine."

The story reported that mine superintendent Henry Clark said the mine will close when the ore's grade falls so low to be unprofitable. "Phelps Dodge Corp. has set no definite closing date," the story quoted Clark.

But former superintendent Bill Little was known to have offered $200 bonuses plus moving expenses to several families to move to Bisbee, the story reported.

Stories in The Verde Independent continued with that coverage for months before running the Feb. 5, 1953 headline: "P-D continues mining copper but end is believed nearing."

The end was nearing, and on March 26, 1953 The Verde Independent ran the bad, but not surprising, news that Phelps Dodge had officially shut down the mine.

But the status of ghost town didn't happen suddenly when the mine closed. Because of the steady slowdown in ore production, the town had been shrinking in population and business.

A March 19, 1953 story in The Verde Independent presented the banner headline: "It's official: Jerome is Ghost City and darned proud of it."

That story reported that the Jerome City Council had voted to go into the ghost business. "Jeromites, with the enthusiastic backing of their municipal officers, agreed Sunday to capitalize on their fallen status by turning their town into 'the Williamsburg of the West.'"

Although the town had been dying for years and there was nothing sudden about the death of mining, the folks in Jerome decided not to let their town pass into oblivion. The story told how they would prevent Jerome from being forgotten.

"... so townspeople formally launched the Jerome Historical Society to preserve all things of historic interest and proclaim the boom town of bygone days throughout the land."

In the meantime, at the foot of Mingus Mountain, Clarkdale didn't make any proclamations. The town simply transformed itself into a different kind of town. But no one predicted that. As a Page 1 story in The Verde Independent reported Aug. 21, 1952, the Clarkdale smelter was suffering a slow but unstoppable death in the same manner as the mine in Jerome.

The headline stated that "Clarkdale smelter now a ghost of bygone days."

The reporter told the story of what was happening. "An enormous quiet spreads today over the sprawling works of the Phelps Dodge Corp. in Clarkdale. The smelter - or what is left - is a serene tangle of machinery.

"The halls of the general offices are still. Week by week, sections of the works still useful elsewhere are trucked out, or shipped by rail. Personnel is leaving almost daily for work in other P-D towns to the south."

From that story it would be easy to assume that the Town of Clarkdale was dying right along with its smelter - just as Jerome was surely dying alongside its mine. But another Page 1 story in The Verde Independent on Sept. 25, 1952 creates an entirely different image.

The headline read: "Town that was dying just grows and grows."

The story reported that Clarkdale had the experts stumped. "They said when the smelter went down the town would go with it. Today, with only a thin trickle of ore riding into the concentrator, Clarkdale is going strong."

There were only 20 families left in Clarkdale employed by Phelps Dodge. "Who are the people taking the place of the company families who moved away?" the story asked.

"There are a large number of Cottonwood merchants and their clerks. There are school teachers, mechanics, traveling salesmen and highway maintenance men."

Jerome did die. It became a ghost town until many years later when it resurrected itself as a tourist destination and artist community. But Clarkdale never died. It just quietly turned itself into a more diverse community.