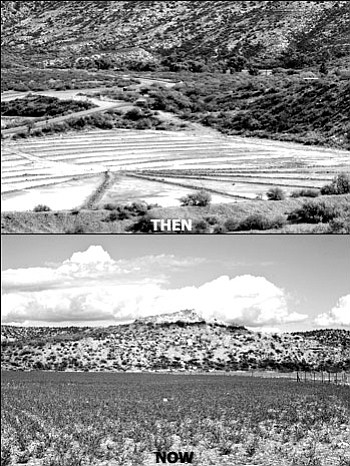 It took half a century, but the orange scar of smelter tailings at the base of the Tuzigoot National Monument has been replaced today with 125 acres of reformed earth and green grass.<br> <i>Photo courtesy of Doug Von Gausig</i>

The tailings treatment, called evapotranspiration, prevents rainwater from leaching though the tailings, but allows it to evaporate into the air.
Photo courtesy of Doug Von Gausig

Most locals remember the bright orange mine tailings that layered the plain below Tuzigoot National Monument. The tailings have always been a surprising eyesore for visitors to the prehistoric Sinagua ruin, but in the mid-1950s they created political stir and gave Phelps Dodge a black eye.

Bill Cameron, editor of The Verde Independent, led the charge for many aggravated by the blowing dust. "They are ruining the Verde Valley climate," Cameron wrote in a May 5, 1955 editorial. "Dust is blowing hundreds of feet into the air and streaming for miles on a windy day."

Cameron also noted that there was a trace of arsenic in the tailings dust. "Phelps Dodge should be asked to do something about it or should be forced into a court injunction."

Cameron also put editorial pressure on the Verde Valley Chamber of Commerce to take a stand on the issue..

PD inherited the mess after W.A. Clark's United Verde Copper Company sold the copper company and smelter in the mid-1930s.

Depending upon the weather, the potentially toxic dust would drift over Cottonwood and even to Cornville. The Cottonwood Progressive Association took up the charge after receiving a disappointing letter back from Phelps Dodge.

J.B. Pullen, manager of Phelps Dodge Corporation, told the association through a letter that he had recently inspected the pond. "Under normal weather conditions, it should not cause any more dust than in past years."

The Verde Independent reported that John Stratten of the National Park Service had received an "almost identical letter after a complaint" several years earlier.

Members of the Cottonwood Progressive Association decided the matter should be put into the hands of the health department and the board directed its secretary to draft such a letter.

The Progressive Association said in August 1955 that, "It was obvious that Phelps Dodge intended to do nothing." Tom Kovacovich added that, "The University of Arizona has advised the National Park Service at Tuzigoot that the tailings pond contains arsenic."

Finally, in January 1956, Phelps Dodge engineers began staking out a dike project that would cover the 429 acres of dried tailings with water from Peck's Lake. The eliminated the blowing dust. A.J. Polocki, the PD representative for the Verde Valley, told the newspaper that the work would be complete by April 1, 1956.

Cameron recalled the complaints and PD's "insulting letter to the Cottonwood Progressive Association that the only thing wrong is the weather."

In March 1956, the tailings had been divided into 120 segments, each to be filled with water. The process was slow. An 8-inch pipe drafting from the Pecks Lake, could only fill four of the basins each day. Polocki reported that the project cost the company $20,000.

After Clarkdale's sewer plant was constructed, wastewater effluent from the system was used to keep the dust at bay.

During the 1990s, the U.S. Environmental Protection agency issued Phelps Dodge a consent order to cap the tailings after concerns that the tailings toxic minerals could percolate through the slag into the groundwater aquifer

A development plan was created for the Peck's Lake area shed new light on the tailings pond. A proposal would have the ponds covered with impervious clay and then a golf course seeded on top. That plan was questioned and the capping project and the housing development were eventually scrapped.

Then, just before Phelps Dodge was sold for $25.6 billion in late 2006, the company, in a sudden flurry of energy, addressed the capping and remediation of the tailings at Tuzigoot as well as the mining waste from the Hopewell smelter and other refuse above Allen Springs Road in the Black Hills.

The tailings treatment, called evapotranspiration, prevents rainwater from leaching though the tailings, but allows it to evaporate into the air.

The 125 acres of reformed earth was seeded and for the first time in a century and green grass grew below the Tuzigoot Monument.