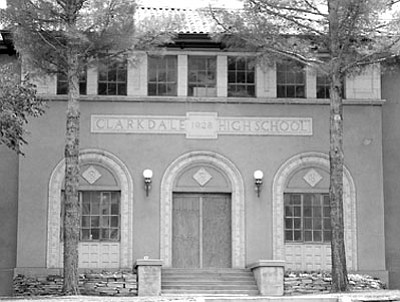 The campus of the former Cottonwood High School in the early 1950s.

Consolidation of Cottonwood and Clarkdale schools wasn't any more popular in the 1950s than it is today. When citizens decided to push for a single high school for area students, they decided to try to form a new district, Union High School District, instead of consolidating the two existing districts.

Although it surely was discussed for a long time, the first action leading to eventually forming a new high school district showed up in the May 9, 1957 edition of The Verde Independent. A group of lay people had conducted a study regarding consolidation.

The story reported: "Cottonwood School Lay Study Committee was accused of betraying a trust by Cottonwood-Oak Creek School Trustees when the group submitted a report urging the board to consider consolidation with Verde District 3 schools in Clarkdale.

"The study group said a straw vote poll showed a majority of the people in the district are for consolidation."

The board of trustees announced it would not approach Clarkdale about consolidation.

Nothing appeared in the local news about the subject until Nov. 7, 1957, when The Verde Independent ran a Page 1 story announcing: "Committee For Better Schools asks immediate action for one high school."

A letter to the editor in The Independent asked Verde Valley residents in Cornville, Cottonwood, Clarkdale, Bridgeport and Jerome to take immediate action to provide one high school to serve both districts. That story said the citizens said it could be either consolidation or the formation of a new high school district.

Things must have happened fast because the Nov. 28, 1957 Verde Independent announced that an election had been called.

"Qualified school electors of Verde District 3, composed of the communities of Clarkdale and Jerome, and Cottonwood-Oak Creek District 6, composed of the communities of Cottonwood, Cornville, Bridgeport, Clemenceau and Smelter City, will go to the polls Dec. 6 to decide on the formation of a Union High School District, which would provide one high school for the entire area."

The Dec. 5, 1957 edition of The Verde Independent ran two full-page ads by citizens' groups on both sides of the issue. One was "For Union High School No!" The other was "Vote Yes." One reason given to vote against the new district was that residents would lose their homes due to high taxes.

On Dec. 12, 1957, The Verde Independent headline announced the new high school district had been approved. Another election in December would decide where the new Union High School District would be located.

Those results appeared in The Verde Independent on Dec. 19, 1957. The story reported that, "The vote climaxed 12 days of intensive campaigning for locating the school in Cottonwood and Clarkdale."

Clarkdale won over Cottonwood by only 75 votes. Clarkdale pulled 579 to Cottonwood's 504. Jerome got seven votes, and Cornville got four. A total of 1,101 votes were cast.

Then on Dec. 26, 1957, The Verde Independent ran a headline announcing that the County School Superintendent was calling for the third election in 40 days.

Residents would vote for five board members to the new district, but it wouldn't be a direct election. The new district was not required by law to call for a board election. But the County Superintendent did.

"The law is clear that I shall appoint members of the new board," the paper quoted Folsom, "but I would first like to have the feelings of the people of the district."

The Verde Independent ran the results of that election in the Jan. 16, 1958 edition.

"C.J. Beale of Jerome, with 498, polled the top vote in the election for trustees of the new Union High School yesterday. The four other top vote getters were Ed King, Clarkdale, 495; Robert Weiss, Clarkdale, 492; Grant Asher, Oak Creek, 422 and the Rev. Perry Jackson of Cottonwood, 419.

MUHS stayed in Jerome through the 1971 school year. It moved to the current campus at 1 E. Fir St. in Cottonwood at the beginning of the 1972 fall semester.