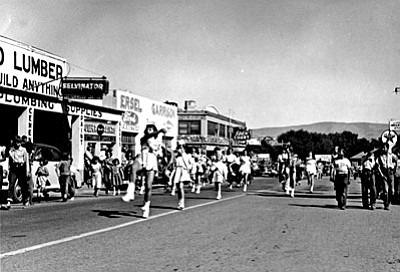 Cottonwood’s roots as the commercial hub of the Verde Valley were planted with the November 1960 incorporation as a municipality.<br> <i>Courtesy photo</i>

By 1962, federal, state and local funding was used to construct a 3,600-foot paved airport runway, deeded to the Town of Cottonwood in 1968.
Courtesy photo

Like Clarkdale's Betterment Association, leaders in Cottonwood, under the banner of the Cottonwood Progressive Association, were looking for improvements to the community after mining abandoned the Verde Valley.

Later, they would lead the drive for incorporation.

Phoenix Cement Company was under construction in 1959 and would start operations soon, promising to fill some of the void for jobs. The population in the Upper Verde Valley had declined after the closure of the Jerome mines in the early '50s and the Clarkdale smelter shortly afterward. Remaining employers included the hospital, the school district, retail stores and ranching.

The Clemenceau smelter had closed in 1939. Fifteen men purchased most of the Clemenceau town and smelter facilities from the company, among them were the owners of Siler grocery and Ersel Garrison, who operated the Ford dealership on Main Street in what is now Old Town.

Clemenceau had been a closed community administered by United Verde Extension smelter. Outside the Clemenceau fence, independent setters had developed their own businesses in what is now called "Old Town."

The Verde Independent reported in 1959 that the Cottonwood Progressive Association was organizing to establish a new post office. Seven months later, bids were called for the post office construction at Main and Ellefson Streets.

Belyea Trucking Co. of Los Angeles purchased two acres of land in Clemenceau to use as a trucking terminal. The company won the contract to ship 620,000 tons of Phoenix Cement to the Glen Canyon Construction site in what is now known as the City of Page on the Arizona-Utah border.

Verde Electric Co-op, a relic of the mining era, was sold to Arizona Public Service. The district manager of Southern Union Gas lit a giant flame to signify completion of the natural gas system from the cement plant to Clarkdale and Cottonwood. Well drilling starts at the site of a new $1.5 million Marcus Lawrence Hospital on land donated by Garrison.

By December 1959, plans were announced for a 94,000-square-foot shopping center dubbed the Verde Town and Country, anchored by an A.J. Bayless grocery.

Businesses prospects were looking up as the decade came to an end. Still the Progressive Association believed that Cottonwood needed "a zoning program, sewer system, and elimination of drunks and loafers," as reported by The Verde Independent. One member is quoted by the newspaper saying, "The park is not for kids anymore. We need to make the community more attractive and promote courtesy."

The Progressive Association again discussed the need for incorporation in February 1960. It had been first proposed in July 1952 and had been defeated 18 months again earlier. By March, Leonard Sexton was reporting that state money available to Cottonwood would be $19 per capita or an estimated $35,000.

Signatures of two-thirds of the property owners were needed to incorporate. Thirty citizens started the drive, and later, 50 circulators collected signatures. Meanwhile, three large property owners, Elven Kerley, Andy Groseta and Russell Sweitzer of Flagstaff filed objections and the boundaries of the town were adjusted.

On Aug. 11, 1960 The Verde Independent reported that incorporation was a sure thing. By then, 450 signatures of property owners had been collected. It was the fourth try in as many years and the second time the petition process had been used. The paper reported that it could take four to six weeks to verify petition signatures.

Incorporation was not confirmed by Yavapai County until Nov. 10, 1960. There were 474 residents who signed the petition. One week later, the first council was sworn in.

Don McDonald, a member of the Progressive Association working for incorporation was the first appointed vice-mayor and then was elected mayor for two terms.

He recalls that most businessmen along Main Street supported incorporation. Another major player was Postmaster Charlie Stemmer, who was against incorporation. Everyone got their mail at the post office and Stemmer saw everyone.

McDonald says, "Incorporation wasn't very popular at first but the county had control and you had to go to Prescott for everything. The highway was not fully paved at that time.

"The town did not have its own buildings at first, so Roland Wilpitz, the hospital administrator, allowed the council to use his office at the old hospital on Main Street for meetings."

John Garrett, who operated a drug store, was the first mayor. He donated land to the town. "We built just a room" for the first council meeting place, said McDonald.

By 1962, federal state and local funding was used to construct a 3,600-foot paved airport runway, deeded to the Town of Cottonwood in 1968.

By 1963, construction had started on a State Route 89A bypass and the state highway department pledged $300,000 to improve SR 279 (now 260). McDonald recalls the road had been unpaved and was used for driving cattle from Camp Verde to be loaded on the train in Clarkdale.

City of Cottonwood turns 50
Clemenceau, once bustling, now fading from memory
Who was Clemenceau anyway?
Big step for leaders in Beaver Creek
The Story of Clarkdale