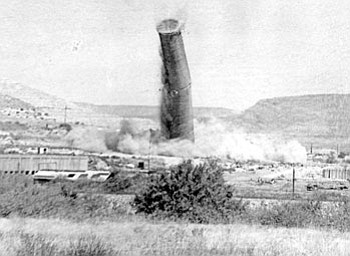 In 1931, no one could have predicted that a technology inspired by the United Verde Copper Company would be discarded, left to age like wine or cheese and then be dug up to inspire a new economic boom over and over. It first happened in 1959 when the technology of making rolled steel out of copper mining waste slag was dusted off but not used.

Those lofty dreams would never have been imagined in the early 1950s. The vast copper ore vein on Cleopatra Hill became harder to reach and the value of the ore was falling. Phelps Dodge, which bought the United Verde Copper Co. during its heyday, would look elsewhere for copper.

The mines closed in Jerome, but there was still enough ore to fire the smelter in Clarkdale for a couple more years. Even that reserve was eventually spent and in 1953 the smelter near the Verde River with its towering stack was closed as well.

The little planned community that W.A. Clark built still looked viable even if most of Jerome was shuttered. The town was put on the market and snatched up one year later by Erle B. Halliburton, who had made his fortune in Oklahoma oil.

Halliburton became the landlord for nearly every resident of the town. He also allowed for the first limited sales of residential property, permitting Clarkdale residents to become property owners for the first time.

Dr. Owen Cranmer was the "baby doctor" in the community. He and wife Becky moved to Clarkdale in 1952 before the last pour at the smelter. "When we came a lot of houses in lower town were boarded up and some in upper town, the smaller houses," Becky recalls. "We rented our house until Halliburton decided to sell houses to those who were renting."


With the mining giant no longer the lord of the land, residents of the company-owned town became restless with unpopular management decisions and the Clarkdale Betterment Association was formed to encourage incorporation and self rule.

Its mission was successful.

Lifetime Clarkdale resident Janice Benatz remembers her mother, former Mayor Dorothy Benatz, saying a group of people thought that "they need to do something to take control. There was a small group of people that was the 'core.' If something needed doing they would do it. They were the Brownie and Girl Scout people, in the band and sports."

Janice was 10 years old when the town incorporated.

Lindner was retained as mayor during the election the following spring.

Halliburton died in 1959 and his Clarkdale estate was placed at auction on the Yavapai County Courthouse steps.

Galbreath was also building the town of Kearny near the Lavender pit at Superior. He owned Socony-Mobile tower in New York City, at that time the city's tallest "skyscraper." He also owned the Pittsburg Pirates.

The Verde Independent published an "Extra" edition of the paper when one month later in September, 1959, the announcement was made that a $15 million steel mill would be constructed at the site of the shuttered Clarkdale smelter. It turned out that Westfield had purchased the smelter and townsite for Webb and Knapp, the world's largest real estate company, whose president was William Zeckendorf.

The proposed steel mill would recover iron from the 30 million tons of slag left behind by the smelter through Webb and Knapp Strategic Corporation. The slag was estimated to contain 30 percent to 50 percent iron plus copper, zinc, and other elements.

A second company, Clarkdale Realty, would manage and sell the residential properties in Clarkdale. A new subdivision was also announced.

The announcement dinner, among whose 200 guests sat Gov. Paul Fanin. Zeckendorf announced plans to release Clarkdale property to private buyers. He also cautioned that the steel mill proposal was only "probable."

Within a month, Clarkdale homes were being renovated at a rate of one per day by 16 carpenters and painters. Some were ready for sale "this week," to be sold at their appraised value, it was announced,

Vice President and General Manager of Clarkdale Realty, Bill Campbell, noted that "a more extensive plan" is needed for homes in Lower Town that are in poor condition.

Coordinator Robert Thompson said, "Definite action should be seen on the steel mill during the next month." In the announcement cited by the Independent, he noted that 500 tons of slag had been shipped to Niagara Falls, Ontario, for testing. "This will show us whether the new steel can compete against the current steel market prices."

The Clarkdale council named Dr. Daniel Bright to replace M.O. Lindner as mayor. Lindner has been appointed manager of Clarkdale Realty, in charge of all Clarkdale holdings of Webb and Knapp except for the smelter site. George Benatz was named to replace Lindner.

By July 1960, Fortune Magazine reported that William Zeckendorf was "in a $100 million jam."

In December 1960, the Verde Independent reported that Webb and Knapp decided to build the steel mill project at Anaconda, Mont., instead of Clarkdale.

Before his spectacular bankruptcy in 1965, Zeckendorf was described as the "embodiment of glamorous deal making." Among other properties he had owned were the Chrysler Building in New York City and Roosevelt Airport, where Charles Lindberg began his transatlantic flight.