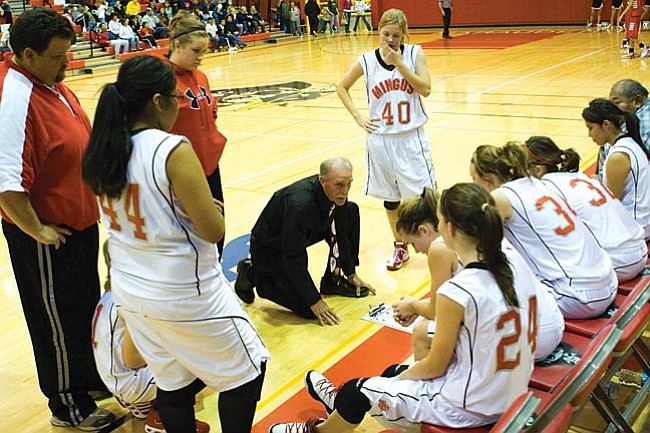 VVN/Shane DeLong Coach Will Rider talks to his team during a time-out.

Mingus Union girls basketball, the No. 9 ranked team in the state, headed into the first round of the 4A II State Tournament on Friday. The Marauders, which have played the toughest schedule in the state in any classification had seen its bumps in the road, but became a better team for it.

Their test in the first round of State came against No. 8 Raymond S. Kellis high school. On the road, the Marauders had a tough battle. The tough battle they had was not just with the Kellis players on the court, but with foul trouble and injuries.

"We didn't get any calls on the same types of contact on our end," said coach Will Rider talking about how Kellis went to the foul line 55 times to Mingus' 19. "They would call us for the fouls. Our kids were close enough to win it."

Both teams got to the basket and made shots consistently in the first quarter with Kellis ahead 23-18. In the second quarter, it was Mingus with the upper-hand, outscoring the home team, 20-16 to go into halftime down by one.

During the second quarter though, the Marauders suffered a blow when guard Kelsey Wokasch injured her ankle, taking her out of the game. That is also when the Marauders started getting into foul trouble.

Despite the surmounting problems, the Marauders stayed tough and outscored Kellis 10-5 in the third quarter to pull ahead by as much as eight points, but settled to four points by the end of the quarter.

In the fourth quarter, the fouls and the trips to the free throw line began to take a toll on the Marauders' score. Three of the team's starters had fouled out and the bench players were rotating in and did a terrific job.

Both teams battled for the lead in the final eight minutes of the game. Then with 18 seconds left, Mingus trailed by only one point. Kellis got the foul calls and took advantage of trips to the free throw line to end the game with a 4-point lead. Kellis went on to play No. 1 Page in the 2nd round and lost, 55-48.

"It was an excellent game and a fun game to watch," said coach Rider. "We were kind of upset that we weren't able to play all of our starters at the same time."

Coming off the bench to do a solid job for the Marauders were Rachel Libby, who took over as guard after Wokasch was injured. Mary Rogers hit a key 3-pointer and Kayla Islas had a solid game on defense.

All region honors for the Marauders went to Heather Rux with 2nd Team All Region and Kelsey Wokasch who earned Honorable Mention.