Wayne See: First Arizonan in the NBA
What Ever Happened To... 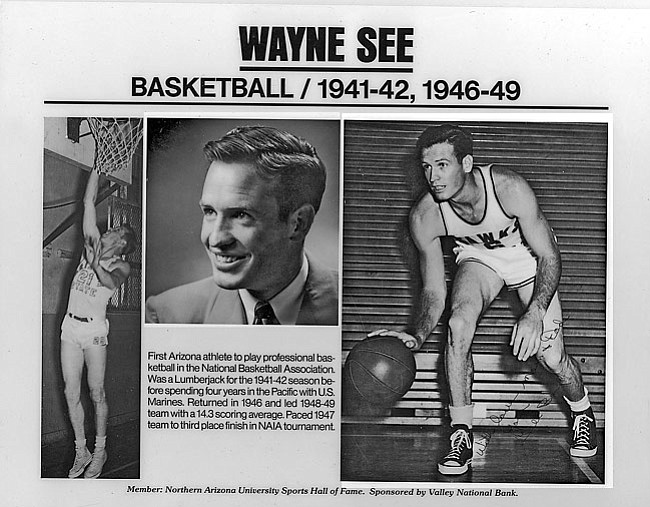 He was born in Camp Verde in 1923, back when there was one general store, four telephones and the roads in and out were dirt.

As a boy growing up on the banks of the Verde River, See, his three brothers and his childhood friends got their entertainment running up and down the riverbank. In fact, there wasn't a whole lot else to do but run around.

Dirt roads and dirt trails were his playground.

So, eventually, was the dirt basketball court next to the old school on Main Street. There he dribbled away the hours, developing an eye for shooting hoops and an athleticism that would eventually take him far from his Verde Valley roots.

In 1949, following his graduation from what was Arizona State Teachers College, now Northern Arizona University, See signed a contract for $5,200 a year to play professional basketball for the Waterloo Hawks of the fledgling National Basketball Association.

See graduated from Camp Verde High School in 1941. Following a one-year career playing basketball at Arizona State Teachers College and a brief career as a miner in Jerome, he joined the Marine Corps and sailed off to war aboard the USS Massachusetts.

When he returned he was talked into going back to college and playing with the same guys he played with before the war.

See would become a leader for that team, which in 1947 became the first Arizona team to play in the NAIA basketball tournament, finishing third. The next year he led the team with a 14.3-point scoring average.

His skills were not overlooked. He soon found himself being recruited by a couple of professional teams. That year, 1949, was the inaugural year for the newly formed National Basketball Association

He originally flew to Chicago to sign, but instead found himself headed to Waterloo, Iowa, along with his new wife Edna, to play for one of the struggling teams in the league's western conference.

See's pro career would last two years, a year longer than the Waterloo Hawks' stint in the NBA. He averaged 5.2 points per game for the Hawks, who finished in fifth place, 19 games out of first place.

The next year See was among the league scoring leaders when the franchise moved to the National Professional Basketball League, averaging 10.5. The Hawks finished in first place in what proved to be league's first and last season.

By the end of the 1951 season, See's knees were hurting. He was offered a coaching job and he could have tried out for another team, but instead he came back to Arizona.

After a brief career running a pool hall/bar in Flagstaff, in which See says he made more money gambling than he ever made playing basketball, he and Edna moved back to Camp Verde.

In 1956, he signed a contract to teach at Camp Verde High School. He would teach social studies and science classes for years, but he will always be remembered as the coach.

See coached track, basketball and six-man football until he retired in 1986.

An avid golfer who once sported a 4-handicap and who once shot two holes in one in the span of a week, See now likes to spend his time quail hunting with his 2-year-old German shorthair retriever, Lady, and archery hunting bigger game.

He and Edna still live in Camp Verde and have two daughters, Sandra (Cramer) and Vickie (Sidey).