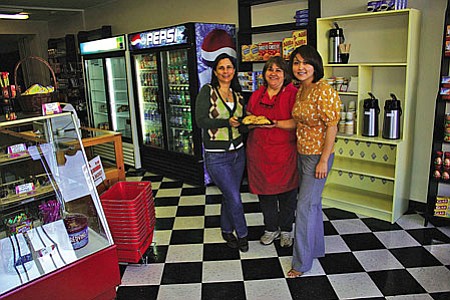 "We'll have a huge assortment of our baked goods," Laura Jones, one of the partners, said.

Those baked goods are prepared fresh daily by Maria Jackson, mother of Rachel Jackson, the other partner. Cookies, muffins, scones, brownies and coffee cake are among the baked items available.

The store also will sell, exclusively, Boar's Head meats and sandwiches. General groceries, including milk, bread and butter will be on hand along with candy, breakfast burritos and novelty ice-cream products.

"We'll have everything from cake mix to soup," Laura said. "We'll have all the basics."

Rachel said that as a mother, she realized a need for a local store for general items so she didn't always have to drive to Cottonwood. "I had wanted to open a coffee shop for several years," she said.

During a discussion about the old Miller's store on Main Street that opened in the early 1900s, the two women came up with the idea to open a general store.

"Clarkdale hasn't had a general store in years," Laura said. "We all wanted something convenient."

"The timing is perfect," Rachel said. She thinks that along with the reopening of the town's theater and the current renovation of a café across the street, people will support a locally owned store.

"We're looking forward to being here for special events in town and, especially, in the park," Laura said.