Blog: Include Wayne See in 2009 NBA All Star game events 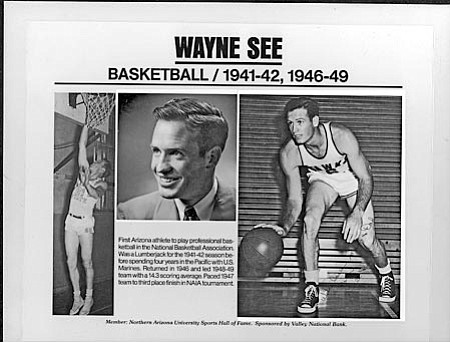 The National Basketball Association's annual All-Star Game is much more than a showcase of the game's current crop of superstars.

It's also a weeklong event in which the NBA's rich history is showcased. The newest finalists for induction in the Naismith Memorial Basketball Hall of Fame are announced. Former greats such as Michael Jordan and Dominique Wilkins serve as judges for the event's slam-dunk content. In past years, the NBA All Star weekend even included an old-timers game.

Next year's NBA All Star Game comes to Arizona for the first time and it would be only fitting if one of professional basketball's Arizona pioneers were honored during the week's activities.

Following a Hall of Fame career at Northern Arizona University, Camp Verde's Wayne See, now 84, was the first Arizonan to play in the NBA during the league's inaugural season in 1949. He played for the Waterloo Hawks and his pro career lasted two seasons. During his rookie year, the 6-3 guard averaged about 5 points a game. In his second season, See was one the leading scorers National Professional Basketball League, averaging 10.5 points a game.

Mr. See was one of the founding members of professional basketball in America, the first Arizonan to ever make his mark in the NBA.

The Phoenix Suns, host for the 2009 NBA All Star Game, should make Wayne See its guest of honor for the event.