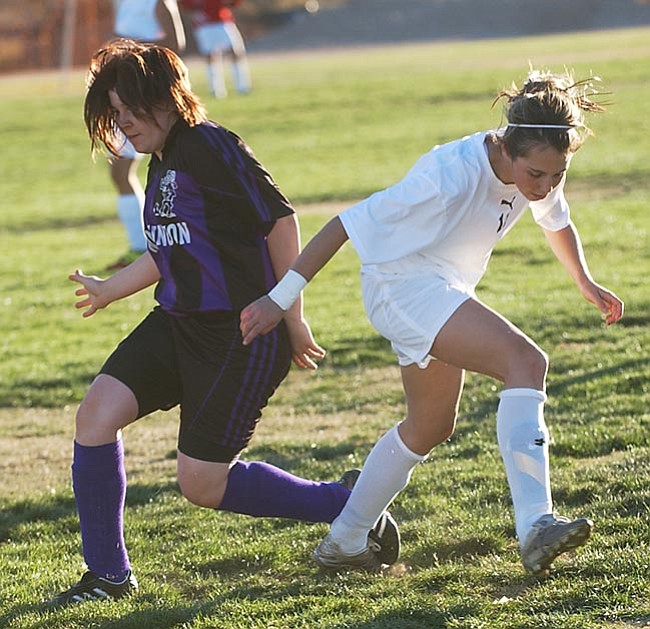 The Mingus Union girls soccer team has been busy over the past few weeks, improving their record to 7-2 overall and finishing runners-up in the Sandra Day O'Connor tournament in mid-December.

On Dec. 10, the Marauders took on Higley in the first round of the SDO tournament and lost a squeaker, 3-2. Drea Duke led the team with two goals, followed by a goal off the foot of Tarah Westover who knocked the ball into the net from a corner kick from Karen Van Gorp.

The Marauders won the next two games. They faced Independence and won that game 6-1, allowing the only goal off of a penalty kick. Natalie Rivera scored two goals, Duke had a hat trick with three and Cassie Bailey added one of her own.

With a record of 1-1, the Marauders were unable to play their third game in the pool against Sinagua due to snow, so Mingus went up at the No. 2 team in their bracket against the No. 1 team Sandra Day O'Connor.

Until the game against Mingus, SDO had scored 17 points in three games and allowed zero from their opponents. This was about to change.

Mingus jumped out ahead 2-0 in the first half and added one more for a huge 3-0 win over the hosting school to go earn a ticket to the championship game. Against SDO, Duke scored two of the goals while Bailey scored the third.

In a very close game, Mingus and Higley were tied at 3-3 at the end of regulation time. It came down to penalty kicks and Higley edged Mingus, 4-3 for the tournament win.

Higley led Mingus 3-2 after the first half of a very tough game. Half way through the second half, Mingus tied the game up at 3-apiece, which remained into overtime. Scoring goals for Mingus were Rivera with one, Bailey with a goal off of a corner kick by Van Gorp, and Duke knocked one in.

Backup goalie, Beth Skornik, who was in for a red-carded goalie Tessa Fanning, made two really nice saves to keep the game close. Skornik got injured during the game and Bailey stepped in as goalie and made a good save in overtime.

The Marauders improved from last year's finish at the tournament as the team didn't make it to the final four.

Since the tournament success, the Marauders have had two games on the road. On Dec. 17, the Marauders traveled to Desert Edge and won that game 6-3. Rivera led the team with three goals, followed by a pair from Duke and Ali Hayes came off the bench to punch in a beautiful goal to seal the win.

Four days later, the Marauders took on Arcadia in a make-up game. With the wind blowing hard, the Marauders battled Arcadia in the first half, with the Mingus defense getting the job done well. The defensive core consisting of Alina Mouritsen, Lisa Rauch, Des Braley and Brittany Fox kept Arcadia from scoring and in the second half, the Marauders had the wind at their backs and took advantage of it.

In the first half, Tessa Fanning at goalie made a couple of dynamic plays to keep Arcadia scoreless and then in one crucial play toward the end of the first half, Fanning dove to keep the ball out of the net, the ball was hit and bounced back out and an Arcadia player took a hard shot. Sarah Westover rushed over from midfield and blocked the shot and cleared the ball out, saving the goal and kept Arcadia scoreless.

Brittany Fox scored the first goal for Mingus in the second half. She transitioned out of defense and put a shot in from about 25 yards out on the right side. With the wind at her back and the sun in the goalie's eyes, it went in for a 1-0 lead.

Rivera followed with a goal from about 20-yards out on the left side. Van Gorp scored the team's third goal of the half from a free kick at 30-yards and finally Tarah Westover scored the fourth from a throw in. The 4-0 lead gave the Marauders some breathing room for the final 15 minutes of the game and the win.

Besides the team's strength on offense, the team's defensive core of Mouritsen, Rauch, Braley and Fox are all "unsung heroes," said coach Buddy Rhodes. "They kept us in games that were real tight."

Other players coach Rhodes commended were Ali Hayes and Riley Backus, both players have come off the bench and added a lot of support to the team. "One of the reasons why Mingus is so successful is because of the bench players. The key to this team is the depth we have."

Saturday, the Marauders hosted Page. The Marauders will travel to Flagstaff on Tuesday in a conference match-up and then return home on Friday to take on Coconino and then they will host Bradshaw on Wednesday, Jan 16 for the team's final home game of the regular season.

Before the game against Page on Saturday, the team carried a 7-2 record, with the only losses coming from Higley in the SDO tournament. Weather has prevented the team from possibly getting three additional wins in the tournaments they have played this year and are currently ranked 5th in the power points.

"This is by far the best first half of the season Mingus has had," said coach Rhodes.

The Marauders will have to take on a tough Flagstaff team in Flagstaff, which coach Rhodes says is probably the best home field advantage of any team.

The Eagles not only play at 7,000 feet, but they also play on turf, the only team in the conference to do so. That game will probably be one of the toughest the Marauders will face this season, but as the Marauders have proven this year, they are a very tough team as well.