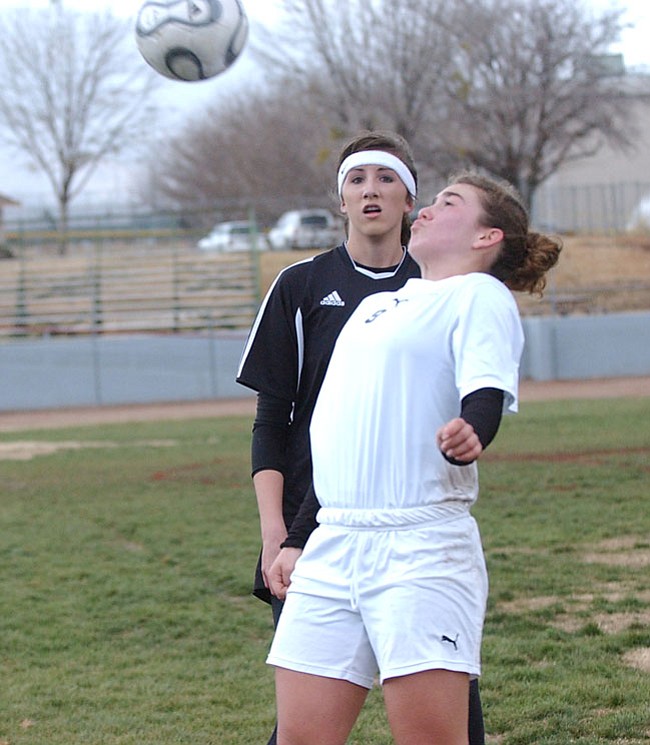 Mingus' Des Braley makes contact with the ball on a header and forces it away from the Page goal. Photo by Wendy Phillippe

Coach Buddy Rhodes and his Mingus Union girls soccer team had a harder time beating the Page Sand Devils than they had expected, taking the game into overtime before winning, 2-0.

The Sand Devils traveled to Mingus Union High School Saturday and had defense in mind. It became clear to coach Rhodes as the game wore on and the score remained 0-0.

"In the first half our defense played erratic," said coach Rhodes. "But we pulled it together in the second half. They came in with a good game plan."

The Marauders battled the Sand Devils up and down the field. The Sand Devils' goalie was deceptively good said coach Rhodes and shots taken by the Marauders were met by the goalie time after time. Despite out shooting the Sand Devils close to an 8-to-1 ratio, both teams were blanked through 80-minutes of play.

One big moment came as the final minute of the first half ticked down. The team's lead scorer, Drea Duke collided with a Page player. They both lay on the field for a few minutes. The Page player got up first while Coach Rhodes and trainer Michael Boysen tended to Duke. A couple of minutes later she got up and had some time to rest. She entered the game again in the second half and by overtime was definitely back to her old self, scoring both of Mingus' goals.

Duke knocked in the first shot during the first 10-minute overtime period. Then she repeated that feat with another goal in the second half of OT to seal the win.

"Persistence by our offense with stellar defense was the key to our win," said coach Rhodes.

Some changes coach Rhodes made in overtime was moving Cassie Bailey from offense to defense, moving Rivera from outside-mid to forward and Ali Hayes to the outside-mid position. That gave Bailey the chance at some good diagonal crosses, and allowed the team to utilize Rivera's speed on the field. Rivera is by far the fastest player on the team, breaking all of the 40-yard records this season as a sophomore.

The Marauders were scheduled to play Flagstaff on Tuesday, but due to snow the game will be changed to a later date, which hadn't been determined yet. The name game for the Marauders will be Coconino on Friday at home. Game starts at 5 p.m.