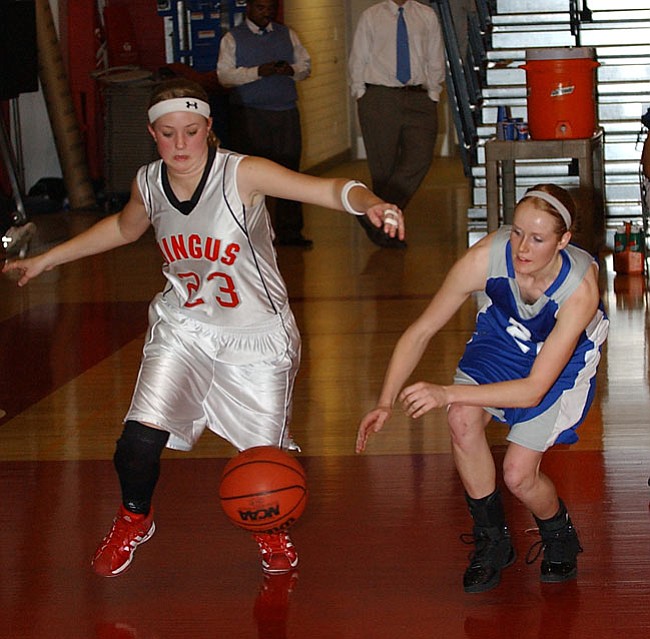 VVN/Wendy Phillippe Tina Hagberg chases after the ball alongside a Sinagua player.

It was a night to shine for the Mingus Union Girls basketball team as they thwarted the visiting Sinagua Mustangs Thursday night, 49-37.

The teams went neck-and-neck for the first few minutes, with the Marauders taking an early 7-6 lead. They extended it to 12-6 before the Mustangs went on a 5-1 run to end the first quarter trailing the Marauders 13-11.

Mingus continued to play tough defense and make the shots, pulling ahead 20-11 with 4:22 left in the first half. The Mustangs didn't give up and they scored six unanswered points to pull to within three with 2:56 left on the clock. With about two minutes left, the Mustangs pulled to within one point, trailing 21-20 and then jumped ahead 22-21. Mingus battled to keep the Mustangs from scoring any more points before the half but a long shot bulls-eyed the basket as the buzzer sounded and the Mustangs led 25-21 at the half.

The Marauders came out in the second half just as aggressive and both teams battled through the third quarter. With 4:13 left in the game, the score was tied 34-34. It was all about defense for the next two minutes and again the game was tied at 36-apiece. That's when the Marauders caught fire.

With 2:26 on the clock Mingus pulled ahead 37-36. Then a key free throw by Kayla Storie made it 38-36. Mingus scored another two points and then five more within the next minute to lead 45-37. With the pressure off and the clock down to 53 seconds, the Marauders played well and kept the Mustangs from scoring another point, while extending their lead to 49-37 as time ran out.

Tina Hagberg led the Marauders with 13 points followed by Heather Rux with 12 and Storie with 10.

It was a strong win for the Marauders who looked to be at the top of their game as they battled the Mustangs in front of their own cheering crowd.

Mingus turned around and traveled to Coconino Friday night to take on the Panthers in a conference game. In a close match-up it was apparent the home-court advantage was too much for Mingus and the Panthers got the 50-45 win.

Coconino and Mingus went shot for shot in the first quarter with the Panthers getting the 2-point advantage after the first quarter. The Marauders faltered in the second quarter and were outscored 16-3 to go into halftime trailing, 29-14.

The Marauders regrouped and came out fighting, outscoring the home team, 13-8 and coming to within 10 points heading into the fourth quarter. Mingus continued to gain some ground but ran out of time, outscoring the Panthers 18-13 in the fourth but coming up five points short of tying the game.