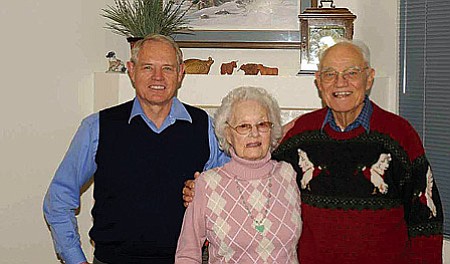 Donald J. McDonald, a long time resident of Cottonwood, celebrated his 90th birthday with his wife, Anna C. McDonald, and several children and grandchildren this past weekend at the Flagstaff home of their son, Don. While his birthday was Jan. 6, the celebration and family dinner was Jan. 5, to accommodate travel plans. In attendance were sons Bob (with wife Ann), Don (and his wife Sherry) - both from Flagstaff, and daughter Susan arriving from Phoenix. Also in attendance were grandson David and his wife Kathy and great grandsons Kendall and Matthew. Don and Anna graduated from Clarkdale High School in1936 and have lived, worked and subsequently retired in Cottonwood ever since this date. Don was mayor of Cottonwood in the 1960s and was manager of the Verde Valley Lumber Company (in what was called Smelter City) from 1947 until retiring in 1977. This was a lumberyard that had been previously named Jerome Lumber Co. and prior to that, when it was founded, was named McDonald Lumber Co for it was built and originally owned by Don's grandfather, Benjamin C. McDonald. Donald J. McDonald was born in Camp Verde Jan. 6, 1918.