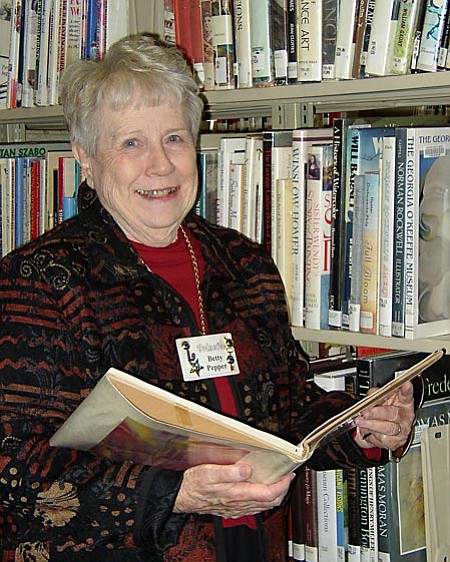 In October 1988, Betty Pepper began volunteering at Sedona Public Library one day a week. Today she still does, but now averages between 15 and 20 hours a week.

"I'm here just about every day," she says recently from her post. "I started in donations and I've been here ever since."

Several service pins pay tribute to Betty's dedication as a library volunteer for nearly 20 years. Working with donations, it's her job to determine if a book is a duplicate, and if so, which version is cleaner, and then to catalog new submissions. At least 60,000 books, she estimates, are donated each year.

During her tenure, Betty has served on the library board of trustees as well as assisted with several projects. She currently serves on the expansion committee. She was even around to hear then-Sen. Barry Goldwater give a keynote speech on Oct. 1, 1994, when the new library was dedicated at 3250 White Bear Road.

"He was very late," she recalls. Goldwater had apparently gone to the first building on Jordan Road that he had dedicated in 1968. "He said 'I never thought I could get lost in Sedona' and we all laughed."

During the past two decades, beams Betty, one of over 170 volunteers, she's cemented several friendships.

"I love books," she notes giggling, "... I'm too busy reading the flyleaves instead of pushing books."

When the library's current facility opened to the public on June 6, 1994, Betty chides that folks nicknamed it "the Taj Mahal because we couldn't fill it. Now we're talking about expansion."

While this seventy-something Sedonan takes life one day at a time, she says she plans to volunteer as long as she's able.

Throughout 2008 Sedona Public Library will commemorate its 50th Anniversary with free ongoing community events that encompass the theme "Honoring the Past, Embracing the Future."

For more than a year a nine-member anniversary committee, spearheaded by board trustee Sheila Hoffmeyer, has been planning a series of activities to engage the community.

With over 400 programs offered a year, Hoffmeyer says, the library has become a community center.

"It's a place where people can come throughout their lifetime," she notes. "There's more than just books here."

The goal behind these events is to recognize the library as a central hub and vital community resource.

The first such celebration begins Friday, Jan. 25, at Sedona Heritage Museum with the opening of an exhibit of library artifacts such as an old card catalog, memorabilia and a pictorial timeline depicting Sedona Library milestones in a world context. In addition there will be a Reading Corner with popular adult and children books and magazines from the late 1950s. A free public opening will begin at 11 a.m. The exhibit continues through May 14.

"Reading on the Red Rocks" launches the second major event. On Friday, Feb. 1, at 6 p.m. Nancy Turner will kick off a free weekly Author Series in the Si Birch Community Room. She will discuss her latest book, "The Star Garden."

Throughout 2008 some 30 national, regional and local authors are slated to discuss their books in a 90-minute informal setting most every Friday through November. These programs will cover a variety of topics and genres from historical and mystery novels to children's books, poetry, hiking, geology and triumph over adversity.

The third event promises to be a festive occasion when the library hosts its 50th birthday party open to the community. Music, entertainment, a special rededication ceremony of the Sedona Schnebly statue, and other activities are planned.

"The public can re-celebrate contributions to the library," says Sheila, one of 10 board trustees.

"The library has a rich history in Sedona and we are looking forward to evolving in the next 50 years to continue to be a valuable resource for the community at large," adds Marv Hofmann, past president of the Sedona Public Library Board of Trustees.

Its history includes a library that was started by a volunteer group, Friends of the Library, in 1958 in donated space with three shelves of donated books and magazines. In 1962, the library was incorporated as a non-profit, privately owned organization with a collection of 6,230 books. Over the years it has evolved into a technological hub and resource for more than 1.4 million titles. During 2006 the library served nearly 180,000 patrons.

Today it boasts several amenities including 12 Internet-ready public access computers, expanded hours, volunteer opportunities, bilingual books and programs as well as free ongoing exhibits and programs for all ages and interests throughout the week.

"The Si Birch room is a central place for people to come together," says Ann Meiggs, who chairs the Library Public Relations Committee. "And it's open to the community."

The latest addition is the library's revamped Web site, www.sedonalibrary.org. The easy-to-navigate site offers a new teen page with valuable resources for homework and research projects, a community calendar and bilingual links, among other useful functions.

For more information about the library's programs and services, call (928) 282-7714 or visit www.sedonalibrary.org.