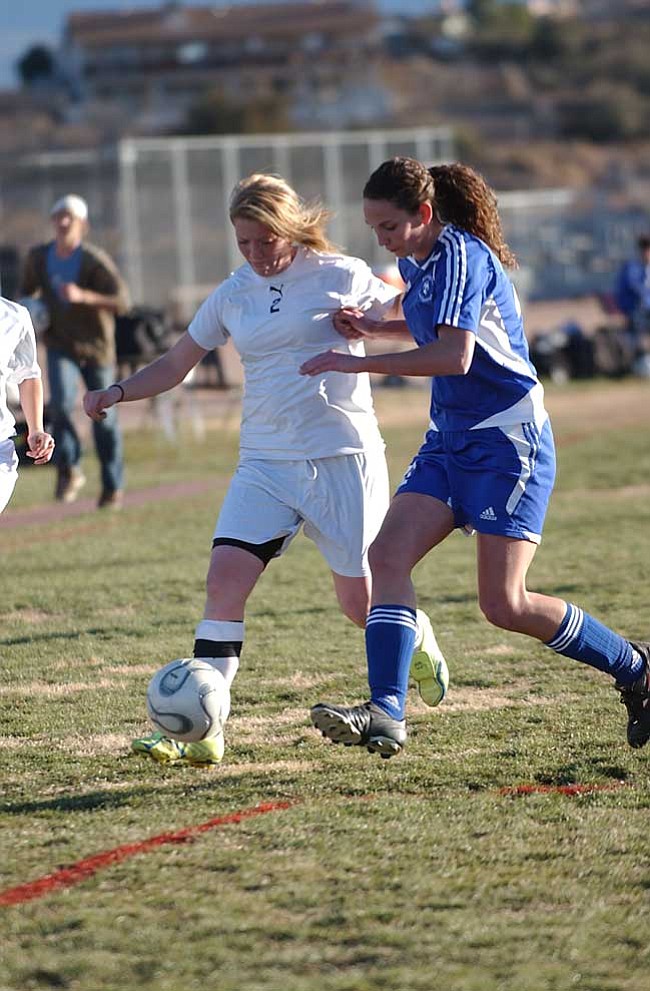 VVN/Wendy Phillippe Tarah Westover fights for the ball near the goal.

The Mingus Union girls soccer team faced their first opponent of the region tournament Wednesday when they took on the Sinagua Mustangs at home. Mingus dominated the Mustangs and finished the game with a 5-0 victory.

For about 20 minutes in the first half, both teams battled, moving the ball from one side of the field to the other but then, with about 19 minutes left, Mingus stopped the drought and scored a goal from Natalie Rivera off of a direct free kick. Karen Van Gorp set up over the wall and Rivera knocked it in to make it 1-0.

Both teams lined up in the middle of the field and began play again. Again the Marauders dominated, getting the ball to the side of the field they wanted and what was only about a minute later, Van Gorp kicked the ball from about mid field to 20 yards away from the goal. Rivera chased it down on the left side of the field and kicked it over to Cassie Bailey in front of the goal. The ball looked wide right, but it instead hit the right goal post and wiggled its way past the goalie and into the back of the next to make it 2-0.

That is how the scoreboard read as the game went into halftime.

In the second half, it was all Mingus again. Rivera scored Mingus' third goal from a cross from the outside to finish it off. No. 4 came off of the foot of Tarah Westover and Drea Duke knocked in No. 5 for the win.

"We dominated the game more this time," said Coach Buddy Rhodes comparing it to the game they played against Sinagua last week in Flagstaff. "They were able to relax in the second half and played well."

Coach Rhodes gave kudos to Cassie Bailey who had a dominating game up front. Her aggressiveness in winning balls kept the ball at Mingus' end of the field and kept the Sinagua scoring threat to a minimum. Defensively the Marauders continue to shut their opponents down. The combination of Lisa Rauch, Riley Backus, Brittany Fox, Des Braley and Alina Mouritsen kept the Mustangs in their stalls.

Marauders move on to the region tournament championship game against Flagstaff today at 3 p.m. The last time Flagstaff and Mingus met, the game went to PK's at the end where the Eagles edged the Marauders.

After today's game, the Marauders will face Flagstaff in the State Tournament as they are in the same bracket, so the Marauder-Eagle match-up may come up a 3rd time this season and just might be the difference as to which team will take the State trophy this year.

Mingus will host the first round of the State tournament on Jan. 30 at Mingus Union High School for a 6:30 p.m. game. But before that, the Marauders are going to try and knock the Eagles off of their perch to claim the region tournament championship.