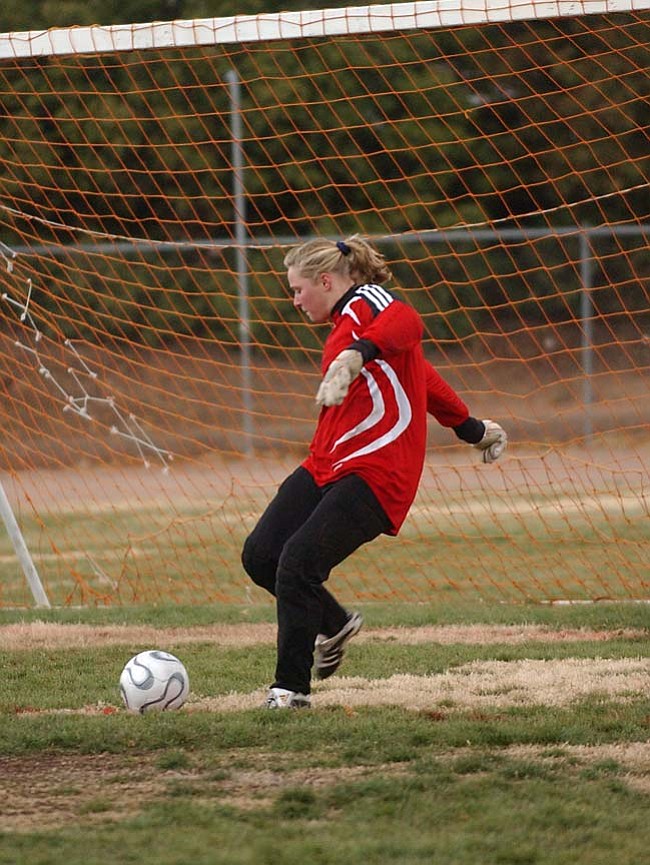 Tessa Fanning clears the ball away from the goal during a game earlier this season.

The Mingus Union girls soccer team took on the Flagstaff Eagles in Flagstaff Friday night. The game decided the 4A II Grand Canyon Region Tournament championships and it was between two teams that already are heading to the State Tournament.

The last time these two teams hit the field together, Flagstaff edged Mingus 4-3 in penalty kicks after regulation and overtime periods. Friday night ended with the same result, with Flagstaff edging the Marauders, 2-1 in regulation.

It was a close, hard-fought game from the start. Flagstaff scored the first goal off of a penalty kick to go up 1-0 in the first half, while the Marauder defense did a terrific job of keeping the Eagles from scoring.

The score might have been tied 1-1 at the half if a goal that looked like it had gone in for Mingus off of the foot of Natalie Rivera was called a no-goal because the officials weren't in position to see it in. So, the goal was not counted and the score was 1-0 at the half.

In the second half the Eagles continued to have things go their way for the first five minutes or so when they scored their second goal of the game to go up 2-0. The Marauders weren't going to leave without a fight.

The Marauder defense kept Flagstaff quiet and with about 18 minutes left in the game, the Marauders scored their first goal. Lisa Rauch transitioned out of defense and kicked the ball with a chip shot over the Flagstaff defenders and into the path of Cassie Bailey who knocked it into the back of the goal.

The tide had changed and the Marauders went on the offensive, unfortunately they ran out of time and opportunities to get another goal and tie the game.

Goal keeper Tessa Fanning had a stellar game for the Marauders, making save after save. The defense was also top-notch, keeping the Eagles to only two goals during the 80-minute game.

"Anytime your defense can hold Flagstaff to one straight-up goal, it's an excellent job," said coach Buddy Rhodes.

The Marauders finished their regular season schedule going 8-1 in the Grand Canyon Region. They finished No. 2 in the conference and No. 2 in the region tournament, losing out of the No. 1 spots to Flagstaff both times. But the battle between Mingus and Flagstaff will most likely happen again in the State Tournament as they are in the same bracket together.

"We are on the same level as Flagstaff and to play well against them, the whole team has to be clicking on all cylinders," said coach Rhodes.

Indeed, the No. 5 ranked team in the state, Marauders all are clicking. After the championship game, eight players were given All Region honors, two more than the Flagstaff team, a first in Mingus girls soccer history.

Lisa Rauch is the first player in Mingus girls soccer history to receive All Region honors all four years.

This young and talented team will have its first test in the State Tournament as they take on the No. 12 Raymond S. Kellis team at Mingus Union High School on Wednesday.

The game was scheduled for 6:30 p.m. but it may be changed to 4 p.m. so check with Mingus Union High School for the correct time to come and cheer on the Marauders.