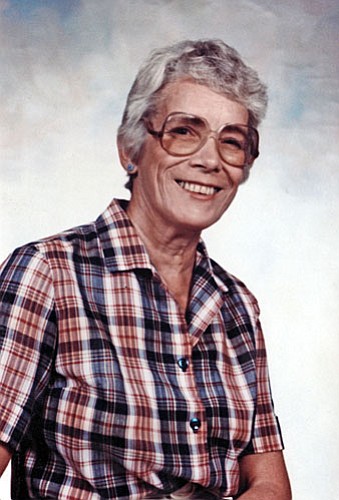 Betty Lou Cool Brumley, 80, died at the Yavapai Regional Medical Center in Prescott on Jan. 20, 2008, due to natural causes.

On Aug. 11, 1945, she married James (Jim) H. Brumley in Havre, Mont. Together they owned and operated the Jim Brumley Plumbing and Heating Company in Havre for many years until 1976 when the business was closed due to Jim's poor health. In addition to being a mother and a homemaker, Betty kept books and had a strong role in managing the family business.

After hers sons were grown and had left home, Betty fulfilled a dream of hers. In 1972 she earned an associate degree in nursing from Northern Montana College and became a registered nurse. Her specialty was geriatrics, and she worked at the Lutheran Home of the Good Shepard nursing home in Havre first as a registered nurse and then as a bookkeeper for several years.

In 1985, she and Jim moved to Camp Verde and then to nearby Cottonwood. In 1989 she and Jim returned to Havre, where they remained until Jim's death in 1990. Shortly after Jim died, Betty again returned to Cottonwood, where she lived until her death.

She was active in her church and was serving as treasurer of the Verde Valley Property Owners Association.

She is survived by her sons John (Anna) of Havre, Mont., and Kenneth (Pam) of Chesapeake, Va.; sister Faye (Jim) Carter of Power, Mont.; four grandchildren; and three great-grandchildren.

At her request, no church service is planned. Cremation has taken place and she is to be buried along side her husband James Brumley in Havre, Mont., in the spring of 2008. A graveside memorial service is planned with the date to be announced. In lieu of flowers, donations can be made to the charity of your choice.