Bowers to plead to sex crimes? 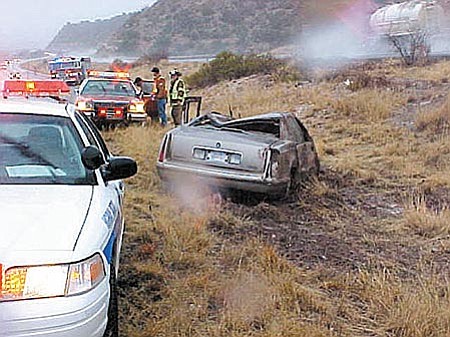 <b>Wet Weather Leaves Mark</b> Water rose dramatically from an all-day wet storm Sunday, but most of the Verde Valley seemed to have been spared its wrath. One home suffered flooding in the Rimrock area along the creek, but in most cases water approached, but did not enter structures. The big problem was on the interstate highway, where fast-moving cars would hydroplane on the surface water. Montezuma Rimrock Fire Chief Mike Van Dyke reported two rollovers on Sunday. One vehicle carrying six passengers rolled at MP 302 but only the driver was transported to the hospital. A newer model Cadillac was destroyed in a second accident, but the driver refused treatment. Camp Verde FD also transported one driver with non life-threatening injuries among a number of freeway accidents Sunday. Verde Valley FD also reported to an accident on Cornville Road. Courtesy photo from Montezuma Rimrock Fire Dept.

The 70-year-old Bowers was recently re-indicted for charges alleging sex conduct with a minor.

The prosecutor, Steve Young, asked that the grand jury review the case again in light of harsher penalties provided for such offenses.

Bowers appeared with his attorney by phone in Judge Hess's Pro-tem B courtroom for the first time Tuesday morning. Hearings on the case had been heard in Judge Janice Ann Sterling's court but her cases are being re-assigned with her pending retirement from the bench.

Bower's attorney immediately told Hess that he would like to schedule a status conference for a change of plea.

The judge set the hearing for Feb. 26.

The case arose from an incident in which the victim's grandmother found Bowers sexually involved with the girl.

Camp Verde marshal's deputies were dispatched to the VFW Hall on East Hwy 260 Saturday evening on a report of a domestic dispute and bar fight in progress.

The suspect, Robert Miller, was uncooperative and was placed into the back seat of a patrol car.

The victim said that she and her husband had gotten into an argument over his intoxication which started inside the bar and then escalated in the parking lot, where another family member was arguing with Robert. The victim then said that Robert Miller punched her in the face and bit her thumb. A crew from the Camp Verde Fire District arrived on scene victim and she was treated for minor injuries

The second victim reported that he was arguing with Miller over his dancing with an elderly woman's "walker machine." Miller refused to cooperate with CVFD and refused treatment.

The suspect placed under arrest and taken to the jail.

Jeff Ballard explained that several of the Cottonwood Parks & Recreation boys basketball teams practiced in the gym between 6 and 8:30 p.m. the night before.

Ballard said that the night custodial staff cleaned the bathroom before the teams arrived and then the building was locked by the custodians after the practice until the following morning.

That's when the graffiti was spotted.

School officials say that the graffiti will be painted over immediately.