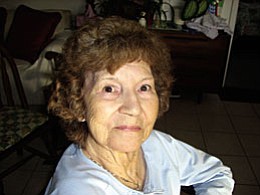 She was preceded in death by five sisters and her grandson.

In lieu of flowers, donations may be made to the Arizona Humane Society.