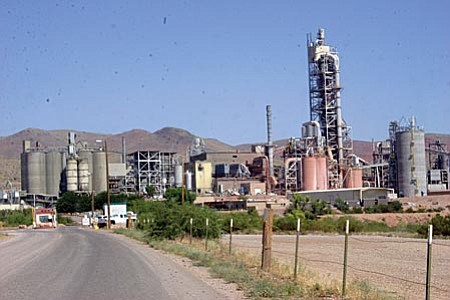 Phoenix Cement, one of the biggest tax contributors to the Mingus Union High School District, could be taken off that district’s tax roles if the unification vote during the Nov. 4 general election creates a consolidated district between MUHS and Cottonwood-Oak Creek District. Clarkdale-Jerome School District would inherit the company’s tax contributions. VVN/Philip Wright

During the June 10 Mingus Union School Board retreat, County School Superintendent Tim Carter said he hoped the Arizona Legislature would make changes to the school district unification ballot before the Nov. 4 general election. He said the language on the ballot could confuse voters.

On Monday, Carter sent a unification protocol to all of the area school districts involved in the ballot question. He stated that the Legislature did not make those changes nor did it offer any clarification on other matters that Carter, school board members and school administrators requested. July 1 was the latest those changes could have been made.

Legislation in 2005 created the School District Redistricting Commission to look at all elementary districts and consider consolidating them into a new district with an existing high school. The commission does not have the authority to create consolidated districts, only to force the targeted districts to put the question of consolidation to the voters.

The SDRC recommended that voters in 78 school districts decide whether to consolidate or not.

But the commission eventually backed off its own recommendation. The SDRC removed Clarkdale-Jerome School from the mix.

The reason given was that the voters in the Clarkdale-Jerome District were certain to vote down the consolidation. If that happened, the two remaining districts - MUHS and C-OC - would have to pay for a second election.

But removal of Clarkdale-Jerome District from the consolidation question seems to make the ballot questions confusing. Another problem that Carter sees is that if MUHS and C-OC are consolidated, Clarkdale-Jerome School District will end up with a high school district of its own. That would fly in the face of what the SDRC intended.

Ballot question #2 reads: "Do you support the unification of the subdivided portion of the Mingus Union High School District #4, with boundaries identical to the boundaries of the Cottonwood-Oak Creek School District #6 to create one unified school district, as a political subdivision of the State of Arizona, to provide instruction in preschool programs for pupils with disabilities and in kindergarten and grades one through twelve?"

Carter simplifies it. "Both questions must pass for a unification to take place. A 'no' vote on either question 1 or question 2 will leave the districts as they currently exist."

Mingus Superintendent Scott Dunsmore thinks the potential confusion on the ballot isn't the only thing to worry about.

Dunsmore said that ballot question #2 will be put to voters only in the Cottonwood-Oak Creek School District.

He fears that taxpayers in the MUHS and C-OC districts will see tax increases. That's because Phoenix Cement Company is located in what would be the new Clarkdale-Jerome high school district. He said Phoenix Cement is one of the biggest tax contributors in the current MUHS district.

Dunsmore said that saving money through the consolidation process isn't going to happen.