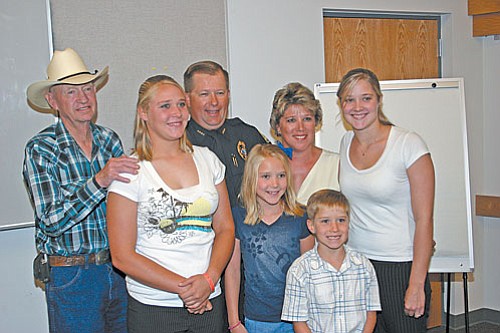 VVN/Philip Wright<br> Cottonwood’s new police chief, Jody Fanning posed with his family after a special ceremony Tuesday afternoon. During the ceremony, Fanning and several officers were promoted and City Manager Doug Bartosh was officially retired from the department.

During a special ceremony Tuesday afternoon, Jody Fanning officially accepted the duties as chief of the Cottonwood Police Department. During the same ceremony, City Manager Doug Bartosh's retirement from law enforcement and as Cottonwood's police chief was commemorated.

Fanning was promoted from commander to chief. He told The Verde Independent before the ceremony that he is excited and thrilled about the promotion. "I'm ready to go," he said.

Fanny said that when he started in law enforcement 22 years ago he did not aspire to being police chief. He said he just wanted to be an officer. "It was five or six years ago that I started thinking about it," he said.

"When Doug (Bartosh) came along, I decided that I'd stay with law enforcement," Fanning said. "I have a department full of outstanding police officers."

Bartosh said Fanning has been with the Cottonwood department for 21 years, and he has served in a variety of positions including attending the FBI National Academy's leadership school.

After Fanning was sworn in, he said his work has required a lot of hours away from home, and he appreciates all the help and support he has received. He said he will do everything in his power to make the department the best in Northern Arizona.

Fanning said that three years ago he was looking to retire in another three years. That changed when Bartosh came in as chief. "During his three years he moved the police department into the 21st century," Fanning said. "He is a great police leader and will be a great community leader," Fanning said.

Fanning presented two commemorative firearms to Bartosh in recognition of his 30 years in law enforcement.

Bartosh said that when he thinks back on those 30 years, "It all seems like it goes by so quickly." He said his favorite place has been Cottonwood.

Fanning then promoted several of his officers. Sgt. Tim Pierce was promoted to commander to replace Fanning.

Officer Matt Watson was given special recognition for being selected by the Governor's Office of Highway Safety as Outstanding Officer of the Year for a Rural Department.

"It's a great honor for the department," Fanning said about Watson. "Matt just excelled in the last year in DUI investigations." Fanning said that Watson is a certified drug recognition expert.