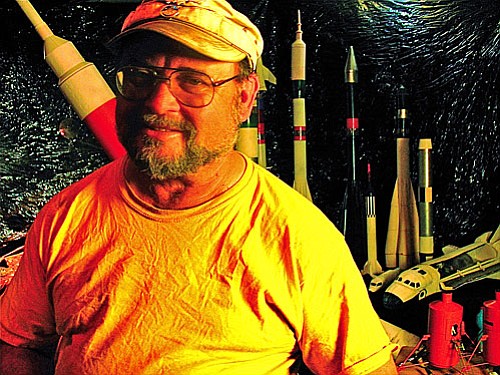 He can seem as far out as the ideas he wants to discredit. And that's made him quite a character to those who know him in the Verde Valley.

James R. Bartzen III, PhD, can talk about his family history during the Napoleonic wars, his youth in Sedona, wines, Russian space technology, Wernher von Braun or masonry. At the moment, though, just as the newest X Files movie is about to hit screens, Bartzen is at the center of some cult interest because of the Phoenix Lights.

The supposedly recurring light formations over Arizona in 1997 sparked a new UFO debate. Bartzen says the idea of space aliens hovering over the Southwest is hogwash. He further claims the Russian space agency has now given him permission to disclose what the lights really were.

He will do so at a multimedia program July 19 at the Sedona Creative Life Center. Until then, he's mum, though clearly Russia comes into the story.

"We were all given a mind," he says. "People are buying into this idea about space aliens and UFOs, and it's wasting that mind. Beliefs are important to know only if they want to be led."

And he can slip into a Russian accent at the drop of a hat. Must be in the genes.

Bartzen has a German-Russian background and was born in Illinois (his great-grandfather had a lively stint as president of the Cook County Board early in the last century). Dating back many generations, his family has been adamant about education and masonry, and Bartzen felt more than impelled to earn a doctorate and learn stonework. But space also called at an early age.

His family moved to Sedona when he was 10. His interest in astrophysics predated Yuri Gagarin's and Alan Shepard's successive trips into space in 1961. By the time he was in high school, he was building his own rockets (even drawing federal government attention after he shot off a 10-foot rocket that hit international air space.)

His schooling was in Phoenix and London. He received his PhD from Merton College, Oxford. He calls Wernher von Braun his mentor and says it was von Braun who suggested he look to the Soviet Union because "Russian space science has always been superior."

That led to Bartzen's career among Russian and American physicists.

Now, for the past 35 years in fact, (when he hasn't been writing a seven-volume text on the Scythian Empire) he has researched UFO sightings and how the stories have affected the population. He says a false belief in UFOs has hindered human advancement. His conclusion is that the belief system centered on space alien visitors in our midst is causing a "waste of mind" when that mind could be put to better, more constructive work.

It's his own brand of gospel for which he now has a platform, thanks to a new friend.

Bradley Blalock, of Camp Verde, was attending the Zaki Gordon Institute for Independent Filmmaking and was seeking an interesting character to be the focus of a short film. His father Gary told him, "Do I know a character!"

That brought Blalock to Bartzen. The initial result was Blalock's short documentary, Myths in Space Science. Now it has become a special program to reveal declassified information at the Sedona Creative Life Center.

Before the 20-minute film, Blalock will perform music of his own composing on the resident Steinway. After the film Bartzen will present an hour lecture and Q&A on the Phoenix Lights and other UFO sightings.

Following the program, Red Planet Diner will be the site of an after party for guests with reserve tickets.

Blalock calls Bartzen a "national treasure." Bartzen says Blalock's film is better than anything produced by NASA on the subject.

In his presentation, he will explain sightings, falsifications and cover-ups and the 60-year history of the UFO culture. He says he knows the facts of the Roswell case but will save that for a later presentation, maybe at Arcosanti. He says he even has the serial number of the American aircraft that he says was the center of a 1975 sighting/kidnapping by aliens story in Snowflake, but he'll save that for later, too.