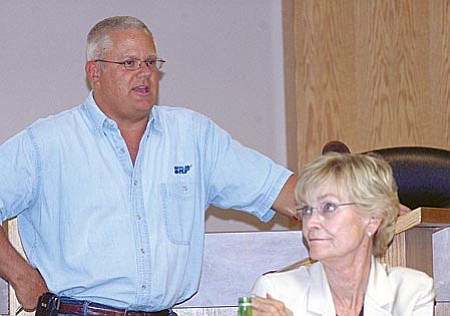 Greg Kornrumph, a senior water rights analyst for Salt River Project made a presentation on Wednesday before the Yavapai County Water Advisory Committee laying out the many concerns the utility has with the growing Verde Valley. SRP has senior surface water rights to much of the flow of the Verde River. VVN/Steve Ayers

For the last couple of years, most of Salt River Project's public statements on the Verde River have been in reference to the pumping of the Big Chino aquifer, source of the river's headwaters.

But in fact, the possible impacts from pumping in the Big Chino are a drop in the bucket compared to the very real impacts from growth in the Verde Valley.

It is a point that Greg Kornrumph, a water rights analyst for SRP, drove home during a presentation at Wednesday's meeting of the county Water Advisory Committee.

"The Verde Valley is the largest pocket of private land in the watershed," Kornrumph said. "Therefore, its growth has the greatest possibility of impacting the surface water supplies we have a right to. You can't talk about water issues without talking about growth."

SRP holds senior rights to a majority of the normal flows of the Verde River along with rights to the floodwaters.

Kornrumph said they continue to have concerns about development in the valley and particularly large developments adjacent to the river, such as Verde Santa Fe outside of Cottonwood and Simonton Ranch in Camp Verde.

But of greater concern is the proliferation of private wells drilled into the area adjacent to the river that SRP has determined contains the river's subflow.

Under state law, surface water includes the subflow of a river or stream in addition to water flowing on the surface.

Kornrumph pointed out that in 1950 there were 190 wells in the Verde Valley. By 2006 there were more than 6,300, half of which SRP contends are taking surface water, to which they claim the right, from the river's subflow.

"Most are small domestic wells. But they have a cumulative effect," he said.

In addition to concerns over the small domestic wells, Kornrumph said SRP has seen more instances of larger users tapping into the subflow.

"Wells continue to be drilled. People continue to put lands under irrigation that have no legal right to be irrigated. It is our responsibility to ensure that our downstream water right holders be kept whole," Kornrumph said.

He said SRP tries to work with individuals who are tapping into the subflow. Sometimes it works and sometimes it doesn't.

He noted cases where SRP has helped landowners move water rights from one parcel to another or to purchase water rights.

In 2004, SRP took action against nine property owners in the Verde Valley who they had determined were taking water that rightfully belonged to SRP. Of those nine cases, three have been settled, three are seeking resolution and three are headed to court.

"I hear people say we want all the water in the Verde Valley," Kornrumph said. "We don't need more water; we need access to what we have a right to."

Kornrumph held up Payson as an example of a growing community that has worked with SRP to purchase adequate surface water rights to fulfill its needs into the future.

Payson recently purchased 3,300 acre-feet of water from SRP that is delivered out of the C.C. Cragin Reservoir, formerly Blue Ridge Reservoir.

"Payson may be the only community in the state that now has legal access to all the surface water it will need to reach total build out," Kornrumph said.