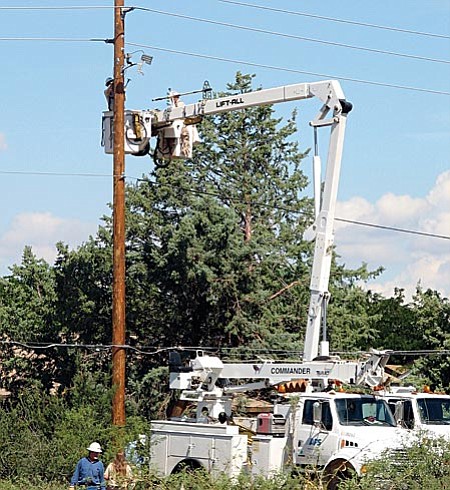 A powerful storm with what some say included a microburst roared through Verde Village Saturday evening, blowing down trees and knocking down power poles and dousing lights.

Wayne Ferguson of Arizona Public Service says their problems resulted from power poles being toppled on Prairie Lane in Verde Village-1. A 12-KV power "feeder line" extends along Prairie Lane and across the Verde River to serve Cornville.

As a consequence, service was interrupted in parts of Verde Village and Cornville Saturday night. Initially 4,000 customers had no power when the lines first fell. Service was restored to many customers that night, but 1,750 were left without power Saturday night, Sunday and Monday until about 8:25 a.m.

Community Development Director for APS Mike Johnson says 15 power poles and 4,000 feet of power cable were destroyed by the storm along Prairie Lane.

He said that he talked with neighbors in the area who reported they could not see out their windows because the storm was so powerful blowing in an almost horizontal pattern.

One homeowner told Johnson that six inches of hail covered his yard.

Johnson says that when APS recognized the severity of the damage, the company made distributions of dry ice so people could save perishables. One distribution of 10,000 pounds of dry ice was made from the parking lot of the Cornville Mercantile at 10 a.m. Sunday. A second distribution of an equal amount was made at 4 p.m. that afternoon and was gone in 60 minutes.

Johnson says residentss in Cornville were especially challenged since the area is served by private wells that need power. Without service, most people had no water to drink and no water for toilets.

He says people were "extremely understanding and patient."

The wooden poles along Prairie Lane were replaced with steel poles.

He says had the Cornville substation, now under construction, been completed, the outage would not have affected Cornville.

This was not the only area in the state without service from the Saturday night storms. Ajo and Gila Bend also suffered outages, but "not as severe as the storm in Verde Village," according to Johnson. "This is the largest outage we have had in some time, certainly with the volume and the number of poles."

The National Weather Service in Flagstaff had issued a severe weather warning for Cottonwood, Verde Village and Bridgeport Saturday.

Meteorologist James Clark said the "reflectivity pattern of the storm on radar" indicated it could be severe. "We call it a hail spike since the hail in the storm shows a unique feature on the radar. We predicted nickel-sized hail with the warning."