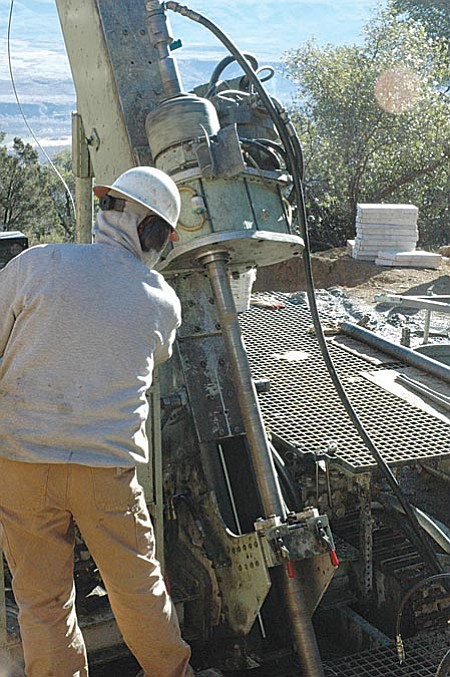 Most of the recent mineral exploration and interest from investors is coming is focused on existing known deposits. Old claims in the many mining districts have been changing hands of late as the price of precious metals reach record levels. VVN/Steve Ayers

The rising value of precious metals is raising the interest of commercial mining companies in Yavapai County's famed mineral wealth.

Over the last couple years, several mining companies, mineral exploration companies and speculators who feel mines are a good investment, have been purchasing claims and mineral rights throughout the county.

Most of the deposits drawing interest are ones that produced during the county's great mining boom around the turn of the century. However, new exploration techniques are improving the odds of finding some previously undiscovered rich ores.

A preliminary report on the first phase of drilling shows the presence of high-grade copper-molybdenum-silver deposits, including a 30-foot thick deposit that assayed as high as one percent copper and 13.7 ounces of silver per ton.

Although they have yet to present a detailed exploration plan, according to a recent press release they now have a large enough portfolio of claims to begin the financing for an "aggressive exploration policy."

A feasibility study of the Sheep Mountain Mine in southern Yavapai County showed it could be profitably mined as long as the price of copper remains above $1.50 and molybdenum above over $12 per pound.

"We have seen a four-fold rise in the price of copper, 10 times in uranium and 15 times in molybdenum. We have good prices for gold and silver but not what we have seen in other metals.

"Nevertheless, there is a real interest in Arizona's minerals," says Nyal Niemuth, chief mining engineer with the Department of Mines and Mineral Resources.

Historically Yavapai County has been known for both gold and copper.

The rich ores found in Jerome were formed by what geologists call a volcanogenic massive sulfide deposit.

The same hydrothermal process that forms "blue smokers," sulfide and mineral rich vents found on both the Atlantic and Pacific Ocean floor today, formed the VMS deposits beneath Jerome -- only the Jerome ores occurred over one billion years ago in a long extinct ocean.

According to Niemuth, the company is currently on the ground investigating possible VMS "targets" seen from the air and looking at possible acquisitions.

"When VMS deposits are found they are relatively small compared to other kinds of copper and mineral deposits," Niemuth says. "But they are typically very rich in copper, zinc and other precious minerals. Maybe with some serious looking and new techniques we'll get lucky and find some more."

Of the 70 known VMS targets discovered in Arizona, 48 have gone into production. Most of them are in Yavapai County.

Niemuth cautions that all that glitters is not gold, at least as far as bringing known deposits to production.

"The truth is in the details," he says, "It is often difficult to tell what kinds of deals are being transacted. Shell corporations and speculators can often cloud the real picture."

The question, he says, is if or when the claims and exploration will turn into production.

"How long or if some of these properties will reach production is uncertain," says Niemuth, "It could be years or decades. There are many factors controlling the market for precious metals."