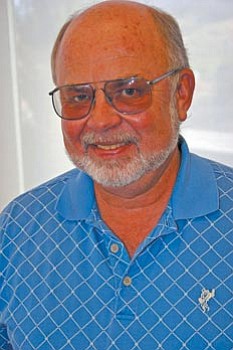 Jerry Wiley was appointed to repeat as the vice mayor.

After the swearing-in ceremony, the council got down to business.

The only item under the New Business agenda was a staff recommendation for the council to approve a reimbursement agreement between the town and the Verde Valley Christian Church for Clarkdale's participation in the extension of water and sewer lines along Broadway and Centerville Road.

The council approved a maximum reimbursement of $97,588 for the line extension. The church will cover about $300,000 of the cost.

The council approved a letter of support for a settlement of the Yavapai-Apache Nation's water rights and its request for a federal water-negotiating team.

"We're basically asking for your support for the team," Beauty said. "It is big for us." He said the Nation is currently "rounding up support" for its efforts.

In a proposed letter to the Department of Interior, Von Gausig stated that the Nation "has been attempting to settle its water rights for more than 30 years. The settlement of these water rights through the assistance of the Water Negotiating Team will ensure fair resources for water for the Nation, and will also reassure Verde Valley residents that the Verde River will remain free flowing."

The letter approved by the council also stated that, "A free-flowing river is a critical issue for the Town of Clarkdale and its residents."