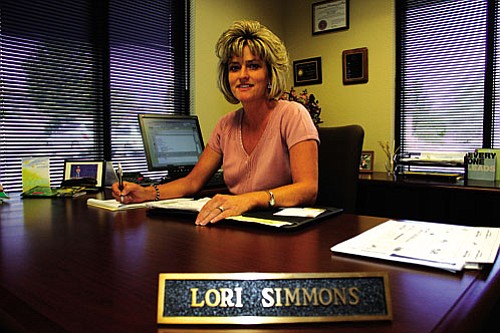 Lori Simmons of Cottonwood has been promoted to President of the Cottonwood branch of First State Bank.

First State Bank of Cottonwood has announced that Lori Simmons has been promoted to Market President. In addition to overseeing the bank's operations, Simmons will remain in her position as commercial lender.

She will have the primary responsibility of business development and retention as well as market management.

Blake Rolley, President and CEO of First State, said Simmons has been a key part of the bank's rapid growth in the Verde Valley.

Simmons went to work for First State Bank 14 months ago, but she has 16 years experience in banking with most of those years in the Cottonwood area.

Simmons is also a Little League coach, member of the Cottonwood Economic Council and treasurer of the Verde Valley Regional Economic Development Organization.

Simmons thinks a community bank does a good job of serving small communities. "Community banks remind people of the banks they grew up with," she said.

"The reason community banks are successful are because the deposits we take in are turned around and invested in the community," Simmons said. "We truly invest back into the community."

She said that since she lives and works here, she knows the people well. Employees of the bank are involved in community projects and organizations. Simmons said the bank looks for employees with that kind of community involvement.

Simmons said that First State Bank's biggest area of lending is in commercial construction. "But residential construction is a close second," she said.