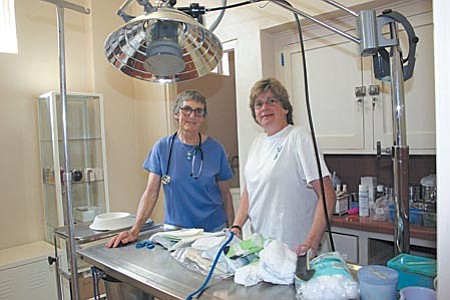 The Jerome Humane Society will hold a grand opening this Saturday and Sunday to celebrate the completion of a six-year renovation project that included this new treatment room. Marge Mitchell, left, and Sally Dryer both serve as volunteers for the clinic and as officers for the society.

The Jerome Humane Society was founded in 1992 when a group of volunteers decided to do something about all of the feral cats in town.

Now the society's clinic at the Civic Center is open every Thursday from noon to at least 5 p.m. "Mainly spay and neuter is our mission," said Sally Dryer, volunteer and vice president of the board. But the clinic also treats sick and injured pets and even performs about 200 surgeries each year. The clinic primarily serves dogs and cats, but birds and turtles and other small animals have been treated.

A good example is Honey Girl, a sweet dog rescued by Jerome resident Karen Laning and adopted by Alice Ross and her children. Honey Girl was brought in with lacerations, and she was covered with more than 200 ticks. She is now fighting tick fever. But she is happy and living the good life with a family that loves her. That is a typical story of the Jerome Humane Society.

This Saturday and Sunday the clinic is celebrating a grand opening of its new, improved and expanded facility. The renovation has been under way for about six years.

"About 75 percent of it was done by volunteers," said Marge Mitchell, volunteer and president of the local society. "We also got some donations, but mostly it was our own fund-raising efforts."

It all started more than 15 years ago when TV personality Bob Barker gave the newly formed society a grant of $50,000. Since then, the society has raised more than $200,000 through grants, donations and fund raisers.

But the current budget is between $25,000 and $30,000 a year. That goes to pay Veterinarian Virginia Kennaway of Phoenix, the only paid staff member. Much of it goes to pay for supplies and medicine. The society can always use donations.

Twice a year the society holds a "Flea Market" fund raiser at Spook Hall. It is the society's main source of money.

"We do it twice a year, and you'd think we'd run out of stuff," said Mitchell. "But people in town are so generous."

Dryer said the annual brunch, held at the Honeymoon Cottage on Halloween weekend, is another source of money for the society.

During this weekend, participating merchants will donate 10 percent of their proceeds to the Humane Society.

The membership to the society is now over 100, and more members are welcome. Dues for individuals are $12 or $18 for families.

The clinic is located behind the Jerome Civic Center at 600 Clark St.