Marty James: Local youth golfer goes on to play with the best
What Ever Happened To... 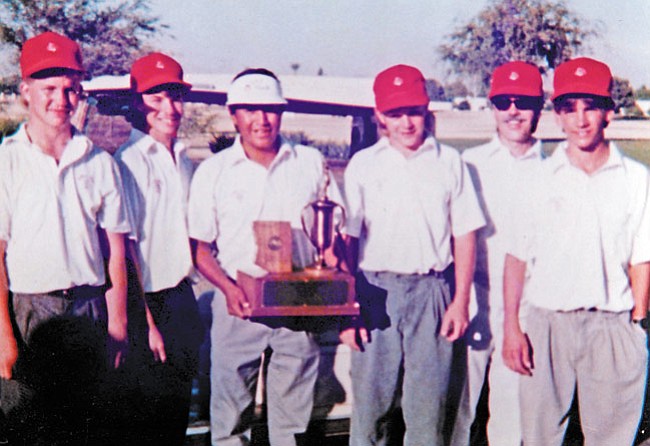 He started playing the game at the old Verde Valley Country Club at Peck's Lake when he was 4 years old.

Once Clarkdale's Marty James stepped onto the golf team at Mingus Union High School as a freshman in 1988, he was already one of the best prep golfers in Arizona.

James was a local legend at the old Peck's Lake course when he was still in grade school. With his father Floyd's encouragement, James spent the four years at Mingus earning individual titles for himself and state championships for the Marauders.

During his four years at Mingus, the Marauders won four consecutive Grand Canyon Region championships and one state championship. Individually, James was the Arizona state champion his junior year. At the time, his two-day total of 141 tied the state record for the lowest rounds ever shot by an Arizona high school golfer.

James' biggest honor during high school competition was being named the High School Golfer of the Year his junior year for all classes, 1A-5A.

When he looks back at his high school career, James is quick to credit the mentorship of Coach John Uidenich.

"Mr. U made things fun and exciting," said James. "For me, he relaxed me and I really enjoyed that. As golfers, we tend to over analyze things. He made it fun."

Coach Uidenich began coaching golf in 1987 when his team would practice at the old Peck's Lake course, which at the time was the oldest golf course in Arizona.

"We would practice and the kids would talk about this eighth-grade golfer," said Coach Uidenich. "I invited him to practice with the team and he would shoot 18 holes after he had golfed nine before we started."

"During the summer of seventh- and eighth-grade, my dad would drop me off there before work. I would golf all day," said James. "I would golf between 36 and 48 holes a day. It was a time for me to learn different golf shots and just play around."

"He was Mingus' No. 1 player on the team from day one," said Coach Uidenich. "He was a good role model, everyone wanted to learn from Marty. I remember him walking down the hallways at school and swinging his arms as we walked so that his body would remember a perfect swing."

James competed in summer golf tournaments while in high school and saw some of the best in the United States while representing Arizona.

One of his competitors during those summer tournaments was a young man named Tiger Woods. The competition continued during their college years when both James and Woods regularly squared off on the PAC-10 golf circuit.

After high school, James had his pick of schools and chose Oregon State University. Playing against Pac 10 schools was one of the major factors in his decision, although it was so far from home.

While at OSU, James had another amazing four-year run at the collegiate level. With James leading the way, OSU won the Nike Northwest Invitational, a first for the school.

James and his team continued to do well his sophomore year when they went to the NCAA championships in McKinney, Texas, in 1994. Each year that James played at OSU, he was recognized by the NCAA and his senior year was stellar when he won the Portland Invitational.

James graduated from OSU with a Bachelor of Science in Management in 1997. Once he graduated, James played at the national level. He also stayed with his roots, helping with junior summer golf camps at Antelope Hills Golf Course. He also worked as the assistant golf coach at Prescott High School.

"It was fun coaching at Prescott," said James. "It was fun to give back and teach what I learned."

Throughout his successful career in high school, college and the national amateur level, James never went pro, realizing after graduating from college that wasn't something he wanted to do.

Instead, James got married and started a family and moved to California for a few years. He moved to the Phoenix area in 2005 and earned his Master's Degree in management. Once his degree was finished, he moved back to the Prescott area in 2006.

Since returning to the Prescott area, James works as a tutor for the Yavapai-Prescott Indian Tribe.

"I enjoy kids and working with them," said James. "I have had a good support system with my family."

Before he moved to California, he was the assistant business manager for the Yavapai-Prescott Indian Tribe. He has his sights set on a seat on the board of directors for the tribe, or even to serve as its president

As for golf, he says, "I accomplished a lot of goals very quickly. I played golf with my dad last month and now that I have moved back to Prescott, I am going to try and play more."