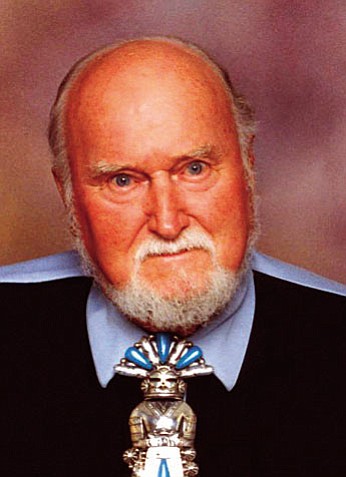 During World War II, he served as a gunner on a bomber named "Ronnie" on 31 B-24 combat missions in Europe, with the 704th Bomb Squadron, 446th Bomb Group, 8th Army Air Corps, attaining the rank of staff sergeant. For his service to his country, he was awarded the European-African Middle Eastern Theater Ribbon with one bronze star, the Distinguished Flying Cross, the Air Medal with three oak leaf clusters, and the Good Conduct Medal with one overseas service bar.

Upon his return from the war, he became a letter carrier with the U.S. Postal Service in Beverly, Maine. On March 23, 1948, he married the love of his life, Shirley Massey. He retired from the Post Office in 1978 with 27 years of service.

For the first two years of their retirement, Bob and Shirley traveled the United States, crisscrossing the country multiple times before settling in Cottonwood in 1980. Their love of antiquing led to the start of the annual Verde Valley Antique and Collectible Show in the early 1980s. Bob was also one of the builders of the original Verde Valley Community Center and started the tradition of their regular spaghetti suppers. He was also one of the builders of the original VFW Post 7400 at the Cottonwood Fairgrounds. He remained active with Post 7400 and the 446th Bomb Group, attending many of their annual reunions around the United States.

In November of 2007, Bob was interviewed for the Veterans History Project and provided a video-taped oral history of his WWII service to be deposited in the permanent collections of the American Folklife Center in the Library of Congress.