AHA: If you build it, they will come
A bootstrap success story 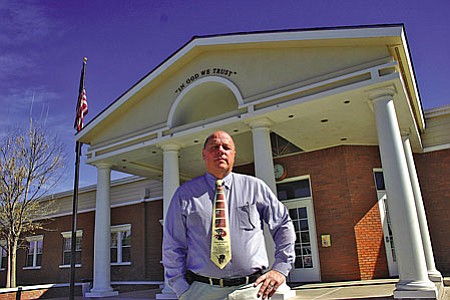 VVN/Philip Wright<br> Steve Anderson, director of American Heritage Academy, works in his office in the Cottonwood campus. Anderson started the charter school in 1995.

In 1994 Steve Anderson and his wife, Vicki Jo, were part of a group of a dozen families that home schooled their children. That was the year the Arizona Legislature passed a law allowing charter schools.

In 1995, they formed a partnership with another school and applied for a charter. The next week they had it.

"We had a charter and no building," Anderson said. But he soon rented space - room by room - in the old Clarkdale High School. American Heritage Academy was opened to seventh-through-twelfth grade students. Anderson said they expected 20 students but opened with 80. Then sixth grade was added.

But the building wasn't in good enough shape for Anderson to get an occupancy permit. "I had to put $30,000 of my own money in that building," he said.

"I started teaching; my wife was teaching," he said. He hired retired people and parents of students to teach. "We didn't need certified teachers. We needed qualified teachers."

He didn't see anything all that unusual about having to bootstrap a new school into existence. "A charter school is a public school that is privately run," Anderson said. It is entrepreneurial -- free enterprise, in the sense of supply and demand.

He likes it that way. It is his vision at work at American Heritage Academy, not that of a faceless bureaucracy. Although the pressures to change that status are increasing.

"If I was thinking about starting a charter school today, I probably wouldn't," he said.

But Anderson's vision still prevails in AHA. "Our vision is to bring kids back to original, classical sources," he said. "We teach the original classics." The school holds up the great men and women of history as role models.

His vision caught on. By 2000, Anderson was looking for financing to build a building on property he owned and offered to sell to the school for the same price he'd paid.

"It was extremely difficult to find financing," he said. Charter schools get no money from the State Facilities Board, nor do they get excess utilities, or overrides or property tax based bonds.

Anderson joined a consortium with six other schools. Even so, no banks wanted to lend them money for new buildings. Eventually, the consortium found a financial group willing to lend $27 million through commercial bonds.

"I borrowed $3 million of that to build this building," he said. Steve and Vicki Jo designed the building and leased their land to the school until AHA could purchase it.

Now, AHA has 320 students in kindergarten through 12th grade in the Cottonwood campus. A Camp Verde campus was established one and a half years ago.

Thirty families were transporting their kids from Camp Verde to the Cottonwood campus. "They wanted us to open a school in Camp Verde," Anderson said.

Anderson said they lost money at first after opening the Camp Verde campus. "It takes at least 60 kids to break even."

Despite Anderson's belief that public education has become increasingly "federally controlled and state mandated," he is proud that American Heritage Academy continues its success story. That story is based solidly in the principles of this country's founding fathers.

"Charter schools are different breeds," Anderson said. 'We firmly believe that parents are in charge of their kids' education.

"It is our vision. It is our passion."